I'm a bit behind on my Inquisition project (painting all the GW Inquisitors ever released, flipping back and forth between oldest to newest) but I do have a new addition, Inquisitor Gregor Eisenhorn. 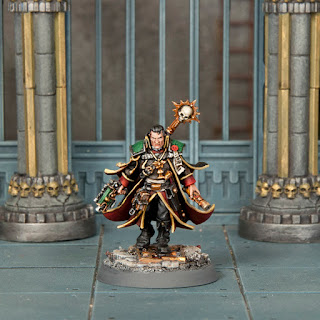 I'm quite sure he's the most recently released Inquisitor (2018) and, sadly, GW resin. I don't think they call it Finecast any longer- but it just isn't that great of a material. There were some bubbles, a few areas of excess material that needed to be cut away near the book, and the details just weren't that crisp. But he's done! I love the Eisenhorn novels, so this character was fun to paint none-the-less.

Up next, another Rogue Trader era Inquisitor.

I was working quite quickly to finish up my long term Sororitas project, with the hopes of getting them done before the new plastics dropped. I got pretty close. All that remained was a group of Celestians, three tanks, and a miscellaneous priest. I ran out of time and lost steam!

I did however finish some Retributors and just got around to taking some photos.

Heavy flamers with a converted sister superior (brazier and chainsword from Trolls Under the Bridge), and a few extra sisters with helmets: 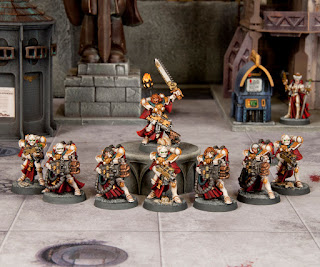 Multi-Meltas with a converted Superior (braziers from Trolls Under the Bridge) and a stock Imagifier: 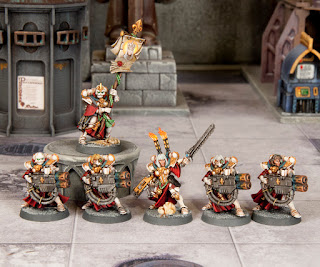 I'm pretty happy with the Imagifier, painted with a likeness of the Order's saint, Lewinna. 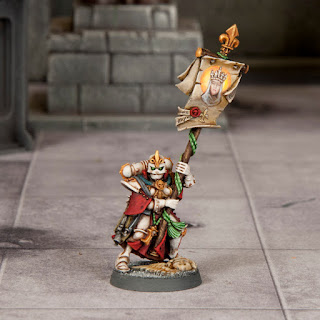 Email ThisBlogThis!Share to TwitterShare to FacebookShare to Pinterest
Labels: Adepta Sororitas, Retributors, Sisters of Battle, Trolls Under the Bridge

I recently completed a few more items for the Gelida project (a setting within the Inq28 40k sub community).

First, I had an extra servo skull who is carrying four grenades. I imagined it would make for a nasty trap, waiting in the snow for an unsuspecting victim to draw near. 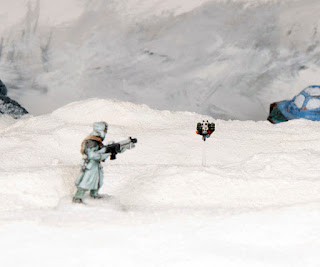 I also have been wanting to build a combat servitor with an antlered head. The skull, designed by Ana Polanšćak, came from a Kickstarter by Harwood Hobbies. The base body is a Sicarian Ruststalker with some zombie scythe arms and a bit of greenstuff. 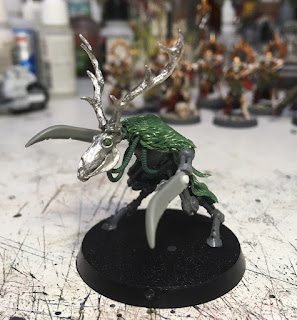 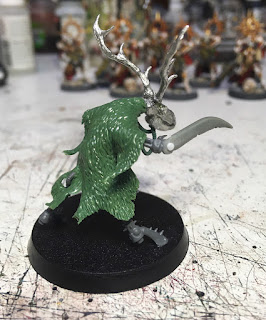 I picture this frightening servitor as being a remnant of a long forgotten Adeptus Mechanicus WΣNDɨGØ project research station. The AdMech explorator fleets would often lay claim to a world by establishing a small base, populating it with guardian servitors held in stasis, and moving on. 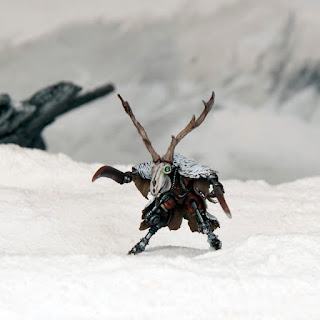 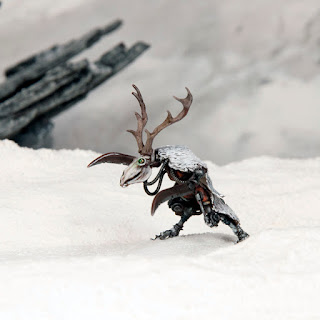 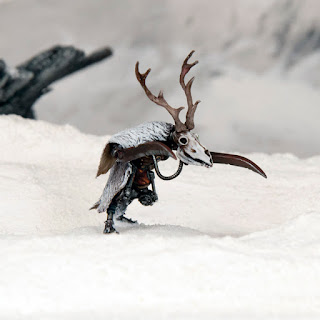 Lastly a few shots that have some Photoshopped snow effects. 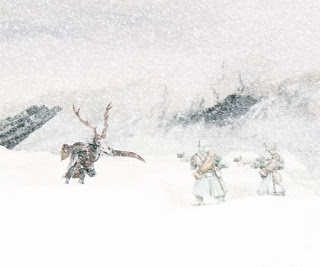 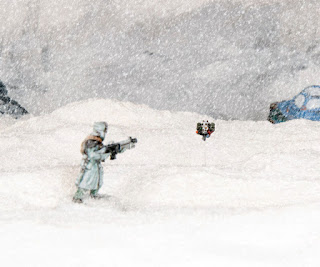 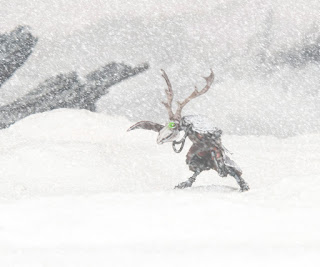 I bought a 3D printer (Ender 3Pro) a couple of months ago and have been messing around upgrading it and printing some wargaming items here and there. I saw a really cool armored tractor vehicle on Instragram one day and was directed to a file on Thingiverse.

I was eager to try a high resolution setting because I hate print lines on miniatures. I think this thing came out pretty well, good enough to use decals on it without picking up too much texture. 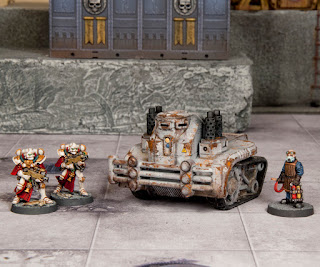 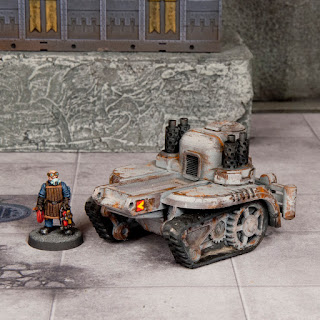 Here's the file (designed by Dxsus):

Evangelist - Order of the Ossuary - Servo-skull

Anvil Industry ran a Kickstarter for some Sisters of Battle type miniatures back in 2018, and I picked a few up at the time. One that I really liked was the Evangelist, who appears to be a Sister Dialogus proxy. I ended up deciding to modify her to fit the Order of the Ossuary group I've been accumulating. 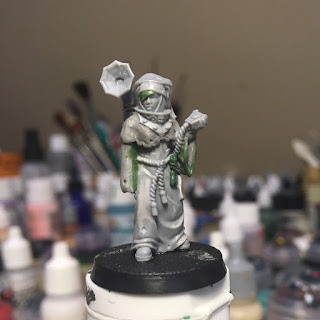 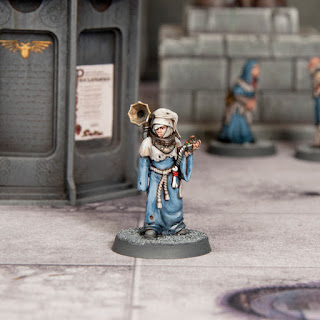 I like the little phonograph horn she has, I imagine her announcing the arrival of the group and the relics they carry, or will be collecting. 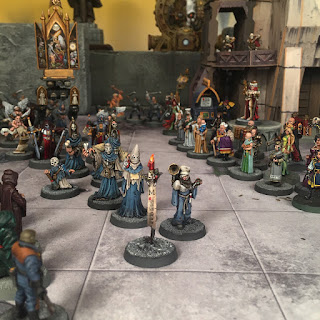 I also painted up an older metal servo-skull to commemorate my hitting 1000 followers on Instagram a few days ago (the 'M' is hand-painted, the text is a decal). 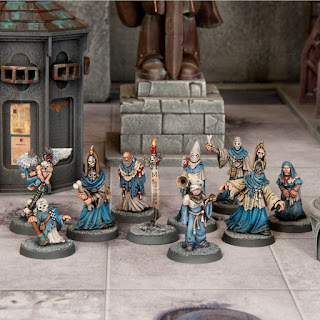 Continuing with my goal of painting up all of  the old Rogue Trader era 'Adventurers', I recently finished up the 'Space Amazon', 'Punk', and 'Mad Punk' (who, oddly, is more calm than the frenzied and maniacal looking Punk). 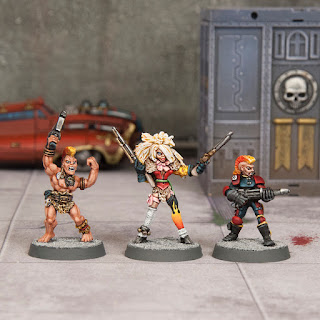 The Space Amazon was the hardest miniature of the range for me to acquire and one I really wanted to paint. Sadly, I could never decide how she should look so it took me years to get around to her. I decided to paint up the other two mohawked punks at the same time. 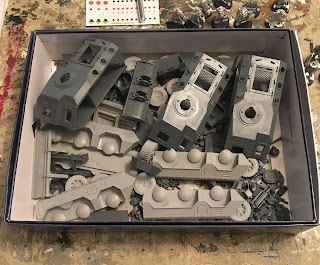 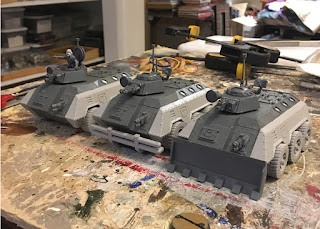 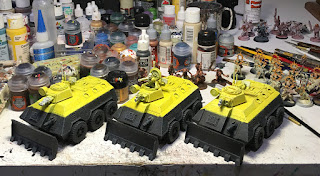 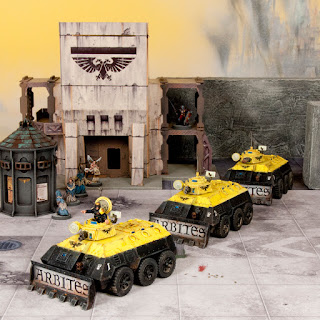 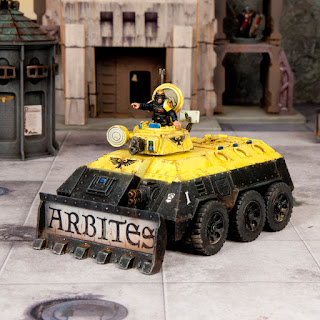 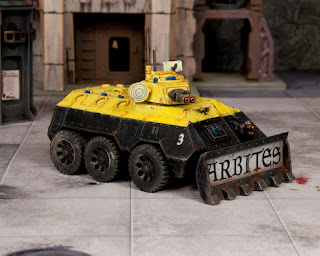