I recently acquired a new sci-fi rule set, "Planet 28", that is made for low model count warband action. It has a solo and cooperative supplement with a small campaign outline. It calls for rebel miners and some mutants. I didn't have either of those ready to go, so I built the Mantic Plague Zombies I had stashed to use for mutants. 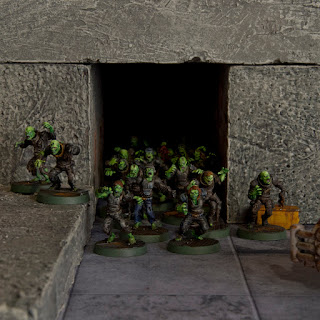 I wasn't super excited to paint these, so I challenged myself to speed paint them and get them done in four hours. I was pretty close, maybe only an hour off. The brush was flying! I decided to go with a campy sci-fi Scooby Doo green to give them an irradiated look. I've painted so many zombies in the past I didn't want to do the same old same old. I also used some fluorescent paint and a bit of glow in the dark pigment. It doesn't have good brushability so I didn't fight it. 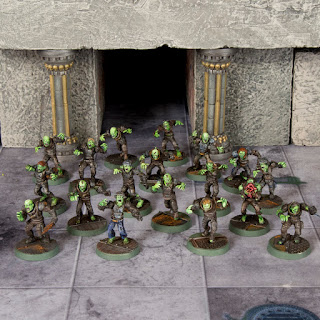 These should be good for a variety of generic things, I could even see them show up in Space Hulk.
Posted by Dr Mathias at 6:36 PM