I've been continuing to play Shadow War: Armageddon about once a week. After match three one of my sisters (the storm bolter, who is a heavy hitter) was captured by some filthy orks. I was worried that I might not have the melee strength the take down the ork sentries, so I decided to spend a promethium cache to get a Celestian for a game. This meant a conversion was in order. I wanted to update my Superior as well- she acquired the Gunfighter advance which meant she can dual wield pistols! I also decided to convert a simulacrum carrier, rather than use a stock Imagifier.

After doing the conversion work it meant I had to paint the three figures in a day to be ready for the match :) 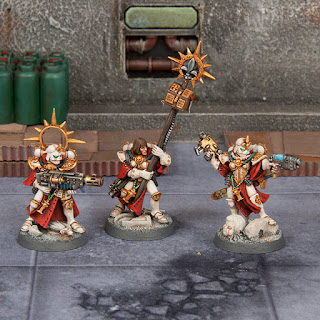 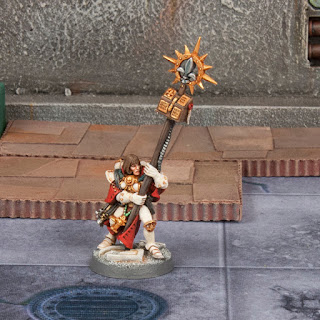 The Imagifier is an old banner bearer figure from the 90s. I cut off her banner pole and added a conversion bit from Trolls Under the Bridge. I really love the idea of a reliquary box- it has a supply hose snaking up to the box which I imagine to power a stasis chamber to protect the sacred object within. As I was getting ready to paint it I noticed that there was a socket in the top (not sure how I missed it) so I added a fleur-de-lis finial, also from Trolls. 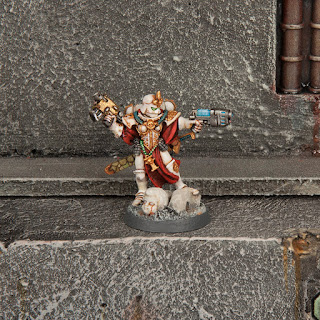 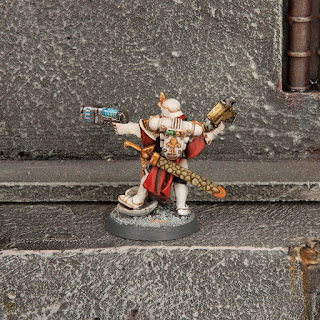 This conversion was a little more difficult because I started with a Seraphim Superior. After repositioning the legs and doing some greenstuff work to pull off the leg rotation, I swapped out the melee weapon she was pointing with for a marine plasma pistol. I also made a sheathed sword (bound in the finest deviant hide) because I had upgraded to a power sword. Looks like I missed painting the gem on the hilt... I was in a hurry :)

Sister Superior Angelica was the star of the raid, taking down two ork sentries in melee without raising the alarm. The Celestian climbed up to the precarious perch where the captive was held and cut her free. I was able to sneak around the other two sentries. After the match Angelica picked up the Crack Shot skill. 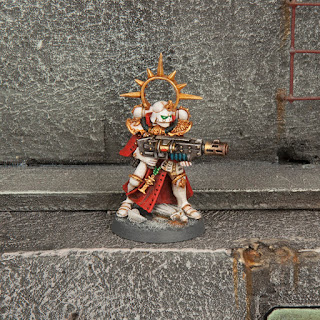 The Celestian is a conversion as well. I already had a helmeted sister missing the front of her flamer I picked up second hand, so she would be a good start for switching to a melta gun. Cutting up these chunky old metal miniatures sucks! After a bit of work with a jeweler's saw and a Dremel I was able to fit a melta gun in place and tie it all together with greenstuff. The halo is another bit from Trolls Under the Bridge, and the small fleur on the helmet is a small component I had 3D printed that I cast in resin. The plan is to replicate this look for a full squad of celestians some day. 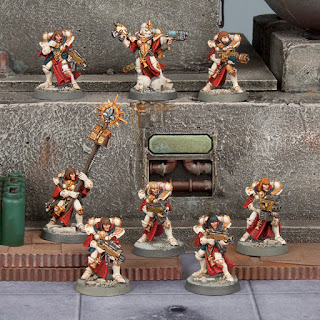 The kill team is up to eight now, and is kitted out with bolt pistols and frag grenades with a sprinkling of red-dot sights and other goodies. After next game I should be able to add another sister.


EDIT: I received a question on a Facebook group asking "Which Order is this?"

I'm not actually sure- there is an army painted with this scheme in the Witch Hunters Codex but I don't believe it labels them. I thought they were a new version of the 'Sacred Rose' order (usually with a black robe), but I've never been sure.

I did find these images, from the Forces of the Inquisition Collector's Guide: 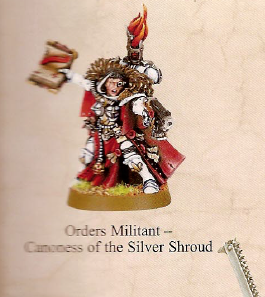 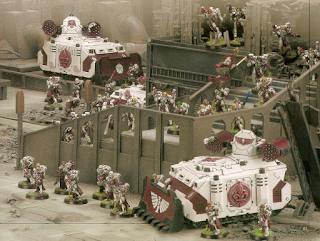 The left one appears to be from the studio army and is labeled "Silver Shroud".

The right is a showcase army with the scheme, and a Sacred Rose symbol on the back Exorcist.

Trolls Under the Bridge Webstore

Trolls Under the Bridge eBay Store