The first miniature I finished after the Lead Painter's League was an Imperial Battle Robot- the spitting image of this guy from the 40K Rogue Trader rulebook: 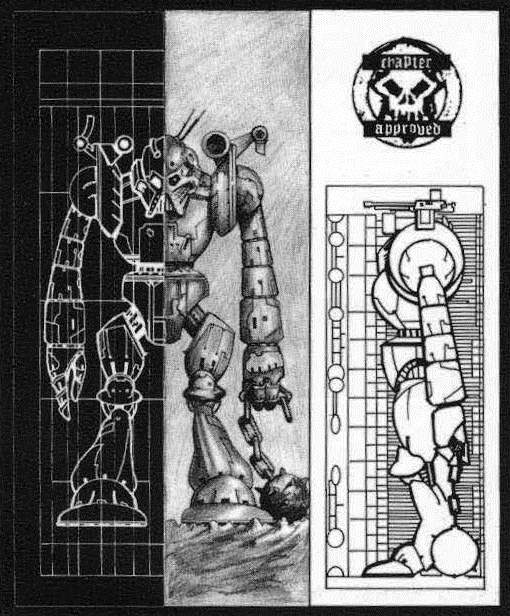 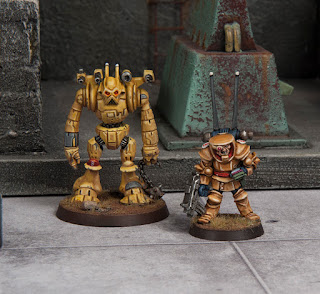 The robot was sculpted by a fellow on the 'Oldhammer Community' Facebook group (it may have actually been Oldhammer Trading) and was offered up for sale a couple months ago. I painted the Rogue Trader era Inquisitor a couple years back- the antennae on the robot's head reminded me of the peculiar backpack so I thought they'd make a good pair. I imagine the Inquisitor to be wearing a pre-crusade era powered armor that has been maintained in a stasis field when not in use, and the robot has seen some wear and tear over the millennia.

'People don't make 'em like they used to" he says to his acolytes.
Posted by Dr Mathias at 10:09 PM 5 comments:

Here's my final entry for this year's LPL, "Geisha Gone Wild", which is clearly a Ghost in the Shell homage. I managed to squeak in to third place overall- which was certainly better than last year's shutout! 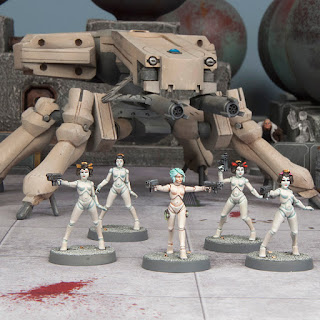 In the background were the Major (an out of production Antenociti's Workshop figure) and Batou (Hasslefree). 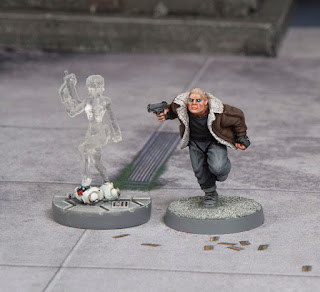 Any fan of the GitS series knows that robotic geisha are prone to being hacked- resulting in all sorts of mayhem. 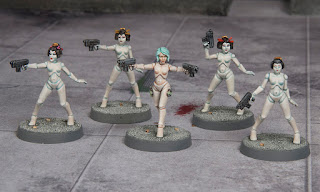 Geishabot bodies are 'Hong Kong Killer Fembots' from Statuesque Miniatures, with head swaps from a few other figures (Reaper, Kensei, and Morland Studios). The female in the center with the dual autopistols is an unmodified Mei-Lin 2.0 from Statuesque. 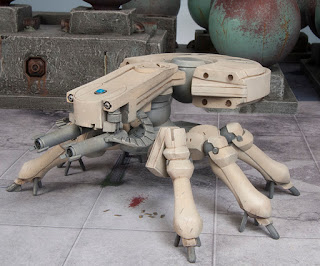 Last but not least was this resin monstrosity I picked up on eBay. I am always enthralled by the scene in the movie in which Kusanagi meets the R-3000 Light Tank in the museum scene. Poetic, brutal, and timed perfectly.

The kit itself was horrendous and I'm 99.99% sure it was a recast. I had to completely rebuild the cannons and bullet belts from styrene, reconstruct the rear, and make 12 new foot spikes because the casting was so bad. It took so much work I wasn't sure I'd be able to get it done in time :) As with many other projects I take on it was worth it in the end. I have some 'before' shots on a different camera, which I may add later. 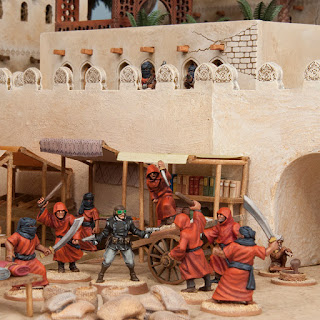 Phantom Ace is from Pulp Alley or Statuesque Miniatures, the cultists are a mix of Northstar 'In Her Majesties Name' Servants of Ra, Foundry arabs, and a Pulp Figures cultist. 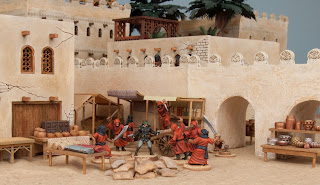 A gigantic cobra I didn't end up using, unknown manufacturer. 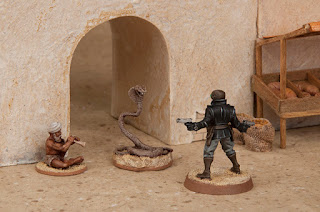 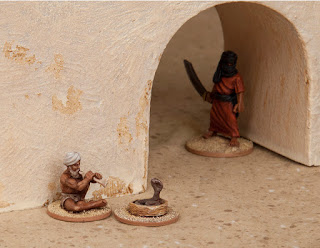 I also bought a couple Mashrabiya screens from Ironheart Artisans, here they are with figures. 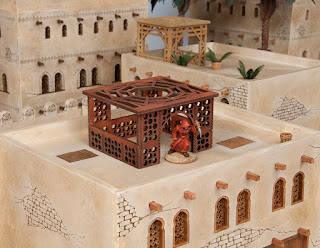 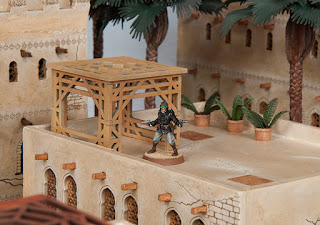 I finished up the market stalls I showed several weeks ago. They've been done for a couple of weeks but I didn't get a chance to photograph them. Since I used them in my week 9 LPL entry (which I can't show just yet) I decided to get them up here. Without further ado: 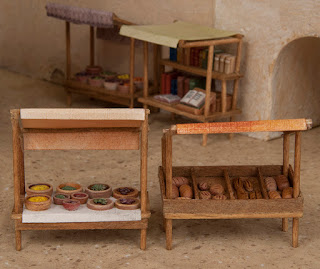 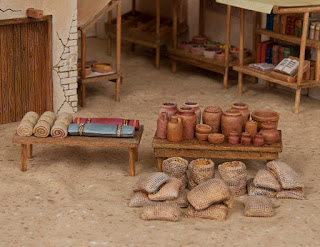 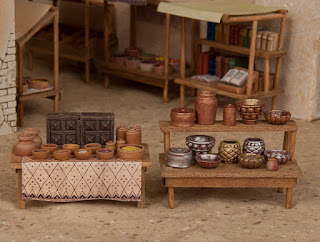 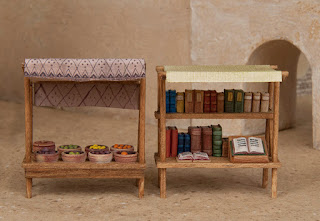 The tables are made of wood, followed by a dip in wood stain. The items are a mix of things, including Hirst Arts peices (molds 58, 59, and 85 primarily), green stuff, buttons, beads and some bread made from press molding a few items from other kits.

I also  bought a few things from Ironheart Artisans. They make some nice North African items and buildings. I picked up some market sets with tables and carts, as well as some balconies and screens. 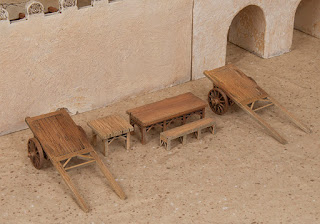 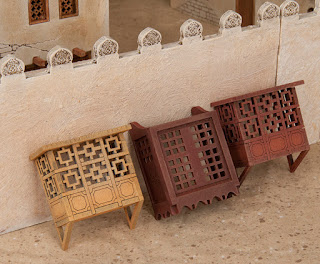 This is a Modelbau Najewitz balcony with an Ironheart on each side. They size up quite well and will be good for variety. I haven't attached the balconies yet, so more pictures will be forthcoming.
Posted by Dr Mathias at 2:56 PM 2 comments:

Lead Adventure League Round 8 - Pulp Girl and the Jade Skull

This is my Round 8 entry for the Lead Painter's league on the Lead Adventure Forum. 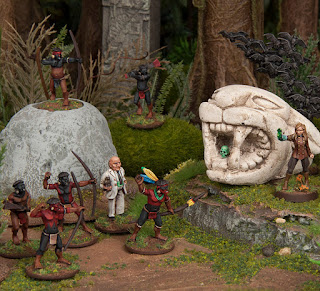 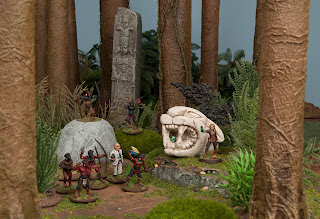 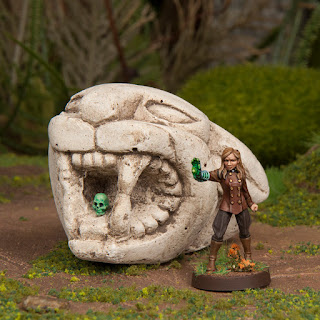 This was one of my favorite entries this season. Pulp Girl is an excellent figure, available from Pulp Alley and Statuesque Miniatures. She's one of the main protagonists of the Pulp Alley game, which I've not played yet, but looks cool upon a read-through. 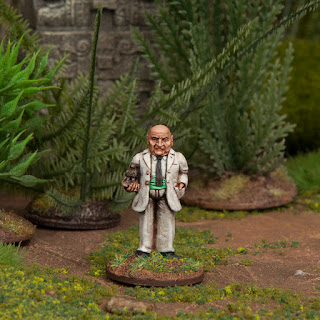 This shady fellow is from the old Grenadier Miniatures 'Nightmare' range, from a pack called Vile Villains. He may still be available from Mirliton Miniatures. 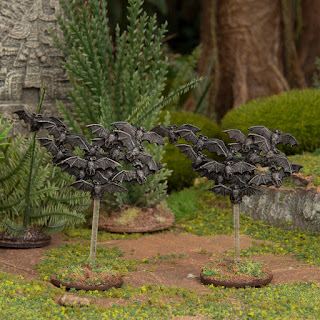 These bats are also from the Nightmares range. 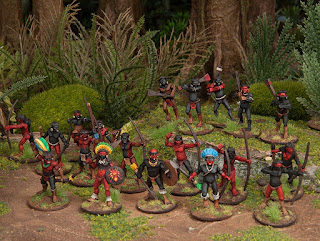 This entry allowed me to finish up the last of the Amazon Indians that I had stashed away. Here's a possibly culturally insensitive mix of Tupi and Botocudo, from Copplestone Castings.