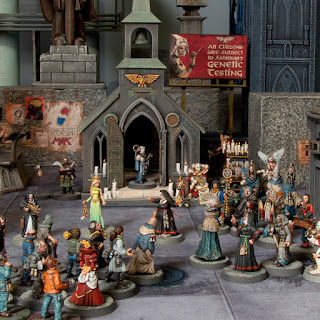 The attentive reader has likely deduced that the citizens of Ophatran Secundus celebrate an unusually high number of holidays, some of which can be traced to the pre-industrial era of the planet, or even to Holy Terra. One such event is Harrow’e’en, celebrated in ancient times as a harvest festival and tied to primitive ideas about the nature of spirituality. Harrow’e’en now coincides with the traditional yearly arrival of the Emperor’s Tithe Fleet, and is celebrated a day before the first voidship docks with the orbital stations above Ophatran Secundus.” 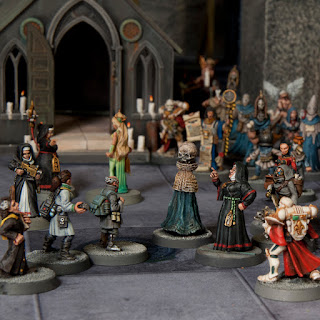 The arrival of the interstellar voidships cause many  citizens of Ophatran Secundus great concern. The local Ministorum Preachers teach that the veil between the Empyrean and reality is at its thinnest on Harrow’e’en. Hostile warp entities are said to cling to the ships and make their way to the planet surface on this day. Pious citizens  practice reciting prayers and charms in the preceding weeks to protect themselves. They must put their warding phrases into practice if they happen to meet the ‘Spirit of the Warp’ and its attending procession as they go about their daily business.” 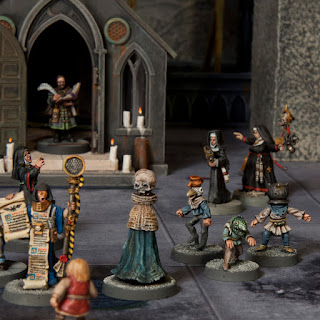 Within each neighborhood, a particularly pious citizen dresses in a fearsome ‘Spirit of the Warp’ costume, and is accompanied by members of the Adepta Sororitas. The Sisterhood round up and test citizens who happen to be outdoors, to make sure they can recite their prayers correctly. Successful recitations are awarded a purity seal, and those who have neglected their duties are taken to be chastised and re-educated. In some districts, children that successfully recite their prayers to the Spirit’s entourage  are awarded fanciful costumes and roam the streets, seeking out citizens for the procession to round up.”
Posted by Dr Mathias at 5:10 PM 13 comments: