I was one of the lucky people that managed to snag a box of Shadow War: Armageddon from the GW site upon release. The box is full of nice terrain and the rules are basically a streamlined Necromunda, so it was a no-brainer for me to try to acquire.

The first kill team I organized is a Sororitas squad. I had most of the figures painted already, but I wanted to use the plasma pistol Superior so I had to paint her up to match. Because I really don't record a recipe when I paint it can be tough to match things I painted a few years ago. This time it went pretty smooth and I used a decal for the text on the chainsword to speed things up. 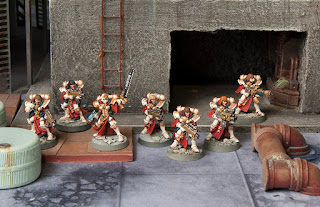 Praesidio Angelica was initially composed of a Superior with a chainsword and plasma pistol, two gunners (one with a flamer and one with a storm bolter and laser sight), two battle sisters, and a novitiate. I added another sister after the first fight, which I won handily. I was glad to have the ladies on the table!

Overall I'd say it's a fun game and plan to get some more battles in.
Posted by Dr Mathias at 11:32 AM 12 comments: