This was my round 7 entry in the LPL, which was ingloriously beaten by the excellent entry by Professor Witcheimer. 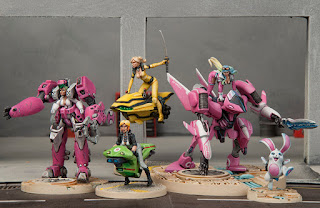 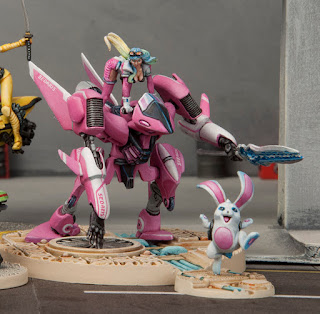 The 'Bride' is a conversion, using a Hell's Belle body and hoverbike with a lovely Statuesque Miniatures head and a katana from a Wargames Factory kit.

The green hoverbike is an out of production figure produced by Antenociti's Workshop.


The Relic Knights figures are not easy to work with. The plastic/resin they use is difficult to trim and the Cerci figures tend to have copious mold lines. In general the consensus is that the Cerci faction had the worst translation from the original figures into the new material- Princess Malya had almost no face detail and the Royal Wrecker's face was so bad that I swapped it out for a Statuesque head (which are very nice and fit the scale better anyway).

The Royal Wrecker in general may be the most difficult to build model I've dealt with, and that's saying a lot as I've been doing this stuff for decades.

I do like them when they're painted though- they're quite different from my usual output, fairly challenging, and the Relic Knights game is fun.
Posted by Dr Mathias at 5:11 AM 1 comment:

My entry for Round 6 of the LPL on the Lead Adventure Forum. 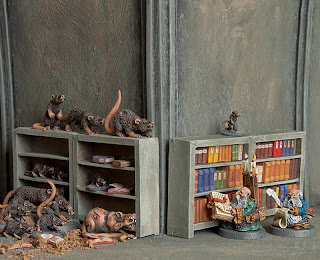 I'd been wanting to make this scene for a year or two (I picked up the dwarves about three years ago) and finally managed to get the books cast after working on them on and off for several weeks. The books are cast in Merlin's Magic from a Hirst Arts mold, and I made a second mold to speed up the process. The bookshelves are foamcore. After that I painted the dwarves and finished up the rats just in time to submit a photo. 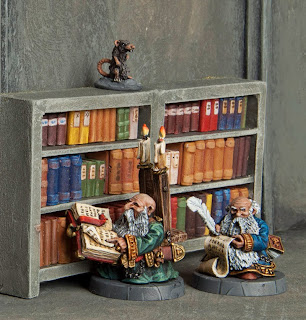 The dwarves are from Lead Adventure Miniatures, along with five of the larger rats. Another rat is from GW's Necrmunda range, and a few others that are clearly GW and are likely from the Skaven lineup. The little rats I bought second hand and I have no idea where they're from. 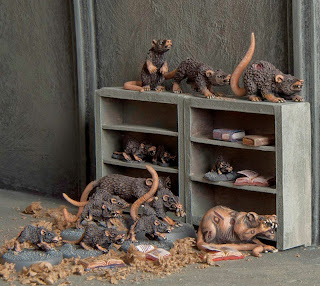 Here is my Round 5 LPL entry. Foundry African cattle and some herdsmen warriors from the excellent Darkest Africa range. 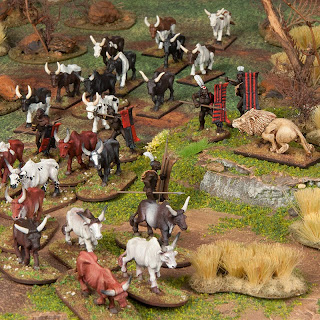 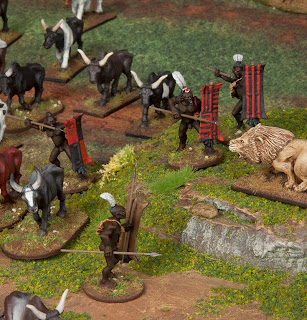 The shields were sculpted by me and then cast in resin. There were a few tribes in Northeast Africa that used variations on this distinctive shape, such as the Acholi, Dodinga, and Lango. I have about 15 more figures to complete for this little group.
Posted by Dr Mathias at 9:36 AM 1 comment:

This is my Lead Painter's League round 4 entry, 'Ambush in Algiers'. The scene includes a mixture of figures, from Wargames Foundry (baggage carriers), Eureka (woman in burkha, market stall), Pulp Figures (nefarious Arab and monkey) , and Hinterland Miniatures (Camel and boy guide). The building is by Modelbau Najewitz. 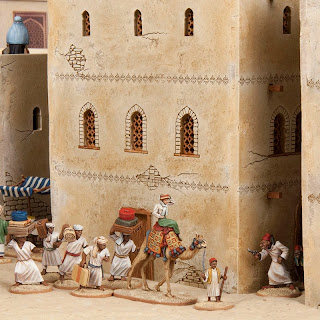 Here is my Round 3 entry to the Lead Painter's League. I knew this was the weaker of my three initial entries due to a lack of color and variety- naturally I went up against Captain Blood, who is arguably the hardest to beat in the League. Defeat! 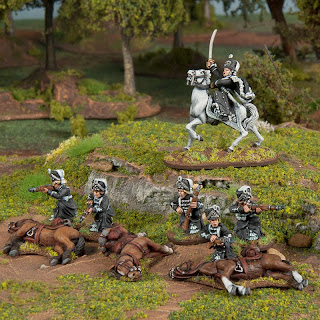 This group adds to my Hinterland Miniatures imagi-nation female hussar force. The kneeling riflewomen will be part of my machine gun units- they weren't available when I painted the maxim teams. Viktoria Luise is a conversion, I added a waving sword arm and a pelisse. The fallen horses are from Northstar.

Here's a couple older pictures prior to including the new additions.