Here's my last painted miniature of 2018, Raging Heroes' 'Sephea'. As has been the tradition for the last couple years, I try to get everything I have primed finished up by the 1st. I painted quite a lot of terrain and miniatures over the last month to meet my self-imposed deadline. I'll be posted more stuff soonish as time permits.

Honestly I wasn't super excited to paint this one since I don't like the resin Raging Heroes uses, it doesn't accept primer easily and I've tried quite a few brands, washed the resin, let it 'de-gas' for weeks, etc. etc. She was originally just a test mini for priming. 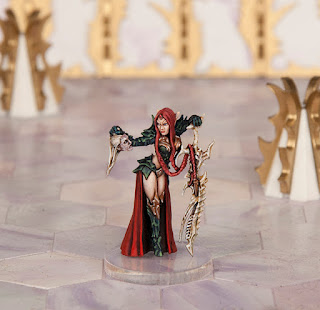 Anyway about a quarter of the way in I really began to like where she was headed and I really like how it turned out. Not sure what I'll use her for, but I based her to match my Wyches for the Arena of Blood. She may come out when a Wych avoids combat for two rounds or something.

I wanted a second set of Drukhari *cough Dark Eldar cough* Wyches for my Arena of Blood game, so that people can play as teams, or have some options if two people want the same type of gladiator. 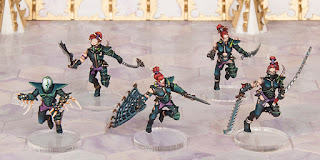 These Wyches are from the Cult of Strife and are opposite sex from the previous set. Pretty much straight out of the box other than the Hydra Gauntlet Wych, who has an old 3rd edition torso, and a custom falchion sword since that's not an option anymore. The razorsnare might be from the Scourge kit. 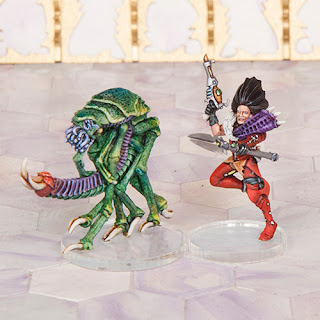 The Beastmaster is a conversion that pays homage to the old 3rd edition Beastmaster look.

The head is a wacky one from 3rd edition- believe it or not, I shaved about 1/8 inch of hair off the end! He's got a greenstuff cape and fur stole as well.

The weird beast is a metal figure, I think it was from Mega Miniatures. I can't find any details on it. Looks like the sort of thing Dark Eldar would put in an arena battle. 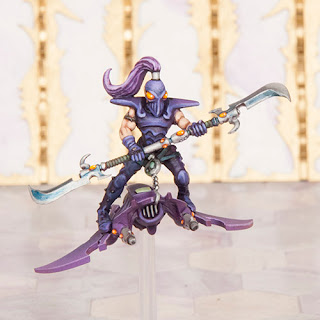 My favorite of the bunch might be this Hellion. I used a 3rd edition head and torso, and matched the color scheme of the illustration on the counter for the Arena of Blood game included in White Dwarf.

I also knocked out a 'new version' Beastmaster on the skyboard. I may make a Razorwing Flock for the arena someday. 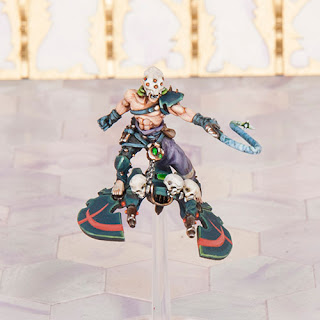 This is a conversion I made many months ago and got around to painting recently. He's meant to be a servant in a noble household, tasked with carrying the sacred books of the house matriarch in case she wants to read something on a whim. 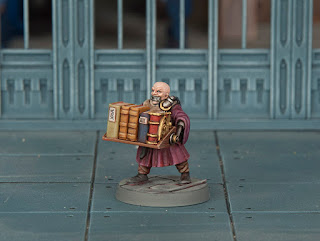 He's based on a Bretonnian body, a Flagellant head, and a variety of greenstuff and plasticard. The books are from a Hirst Arts mold, the ornate one is from Wargames Exclusive. 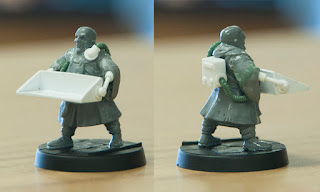