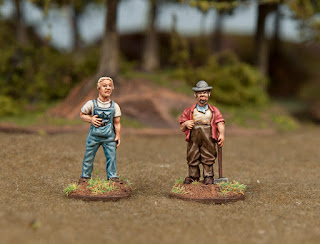 CP Models. The guy on the left is part of their sci-fi mechanics pack. 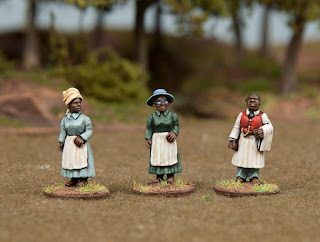 The women are CP Models, the man is Wargames Foundry.
Posted by Dr Mathias at 1:35 PM 2 comments:

A pair of diminutive Copplestone Castings barbarian warriors, from the 15mm fantasy range. 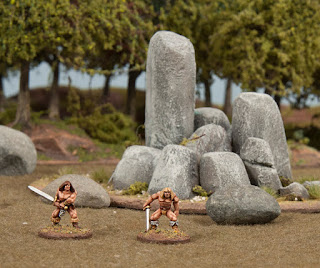 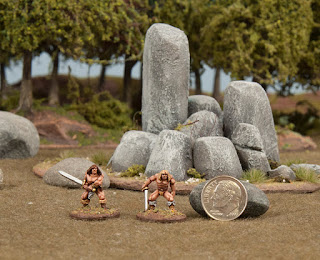 A few more pictures from the random group of figures I painted last month. 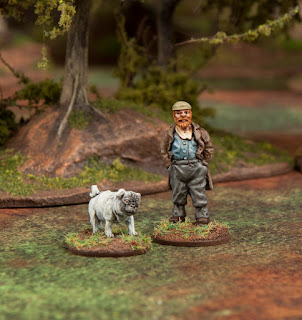 The man is from CP Models and the pug is from a Reaper Miniatures 'Familiar' pack. 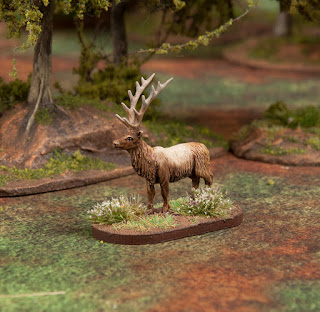 An elk, produced by Eureka Miniatures. 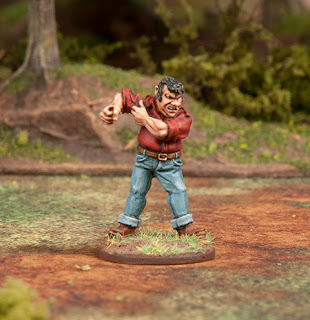 Lastly, a brawler from Hinterland Miniatures. This guy is a character from a TinTin story, I think it was Cigar of the Pharaohs. He was an unnamed sailor that TinTin encountered.
Posted by Dr Mathias at 6:41 PM 2 comments:

This Sohei Warrior Monk (from Kingsford Miniatures) has been primed and awaiting paint for about two years. 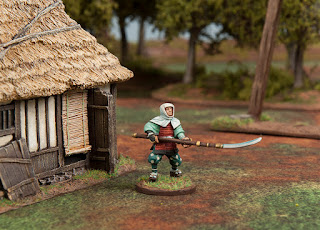 The building was painted relatively recently. It is produced by John Jenkins Designs. 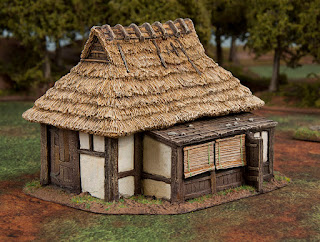 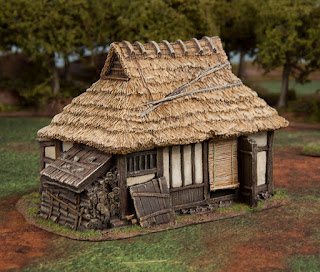 I also photographed a couple other Asian themed terrain items that I've never gotten around to, both by Grand Manner. The resin they use is very  brittle. I bought the bell tower second hand and the wooden structure arrived shattered into about a dozen pieces. 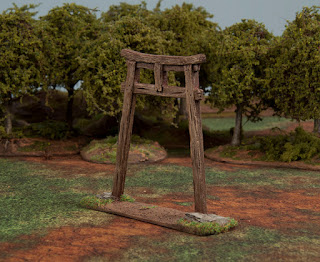 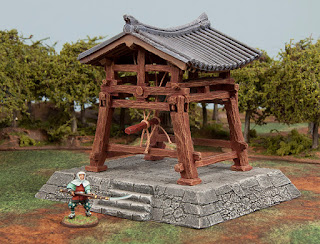 Another figure that was part of the recent primed-figure clear out was 'Lillie Poots' from the manufacturer Statuesque Miniatures. This range of figures, by Andrew Rae, are really top notch and fun to paint. His earlier stuff was hand sculpted and super crisp. He has moved to digital sculpting and in my opinion they are the best digital to metal translations on the market. Perfect resolution of details and fun to paint.

I'm not a huge fan of painting exaggerated OSL (Object Source Lighting) in miniatures, but she has a lantern, so I thought I might as well try it. 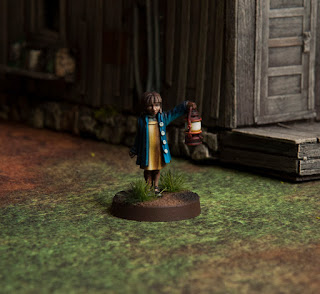 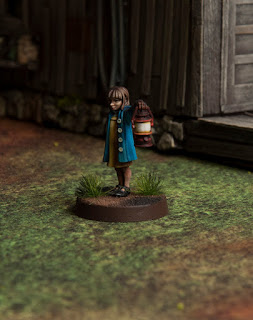 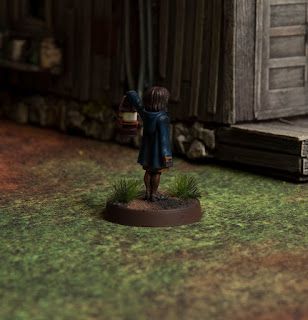 When I set up a more directed, focused light to get a cast shadow and some atmosphere the figure didn't change much, so I'm pretty happy with the light effect. 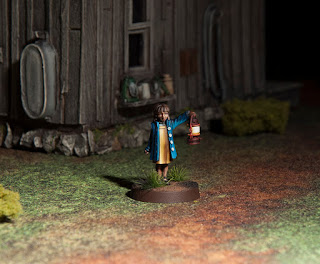 Oddly, it looks a little more rough when it's not evenly lit with an umbrella setup.

My painting queue contained a miscellaneous collection of animals, most of which are African. I think I am about ready to open up a zoo... 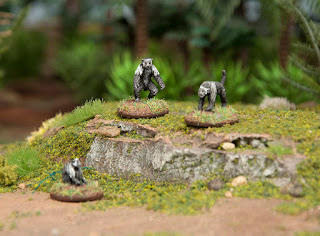 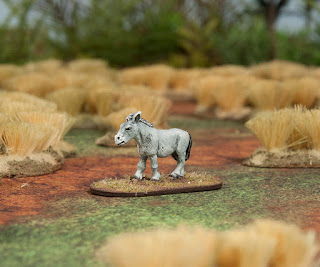 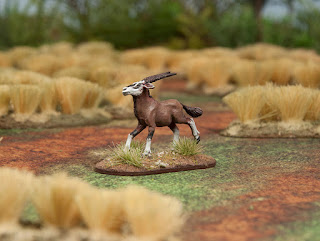 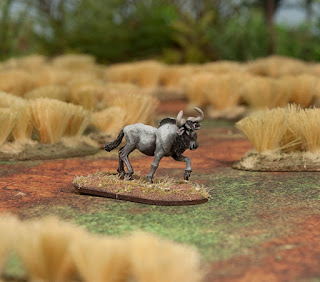 Also in the group was a dead Zebra from Mega Miniatures. The Lion (Black Tree) and Hyena (Ral Partha) were painted quite a few years ago. 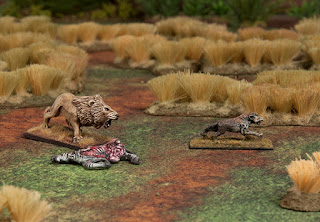 I painted a very eclectic assortment of miniatures in September and October. In addition to the Azande in the previous post and a group of figures for Hydra that I can't reveal yet, I painted a mushroom forest set and a couple dozen figures that have been lingering around the desk for months and in some cases... years. 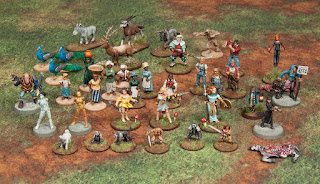 I'm planning on taking some scenic shots of all the groups, but in the meantime I have some Foundry Elf Nymphs that were left over from an LPL entry from three years ago and finally got painted. Honestly I don't much care for the sculpts in this range, there's some odd anatomy and sculpting shortcuts that are very annoying.

The mushroom forest is from a Kickstarter campaign that Atcheson Creations ran. I already had one set painted, and again, took a couple years to get the second set done. 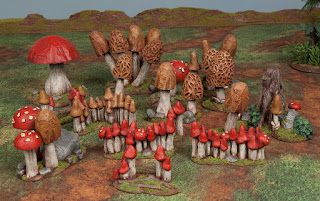 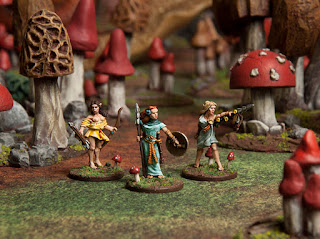 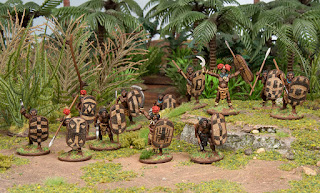 The center figure in the next photo is a head swap using a spare Azande head and another generic  leader figure from a different Foundry pack. 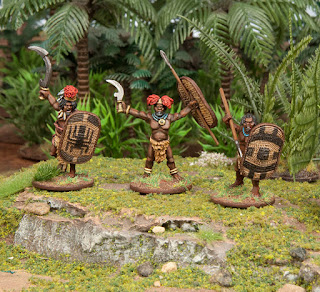