Major work on the main buildings of the project ended today with the installation of bronze doors in the government building. I might do an additional stain on some of the windows and doors, as it looks a little thin. The bricks are on the cartoony side and need a little variety as well. 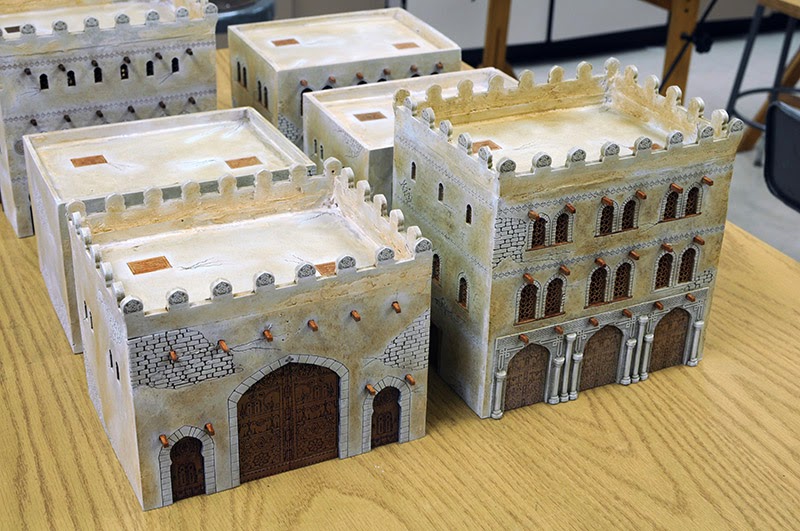 The planters have progressed a bit as well. I stopped them at this stage because I'm going to look for some beads to make a central fountain ornament, and the texturing process is something of a pain so I want to do it all at once. I had some extra crenellations so I decided to knock out some walls while I was waiting on some things to dry. 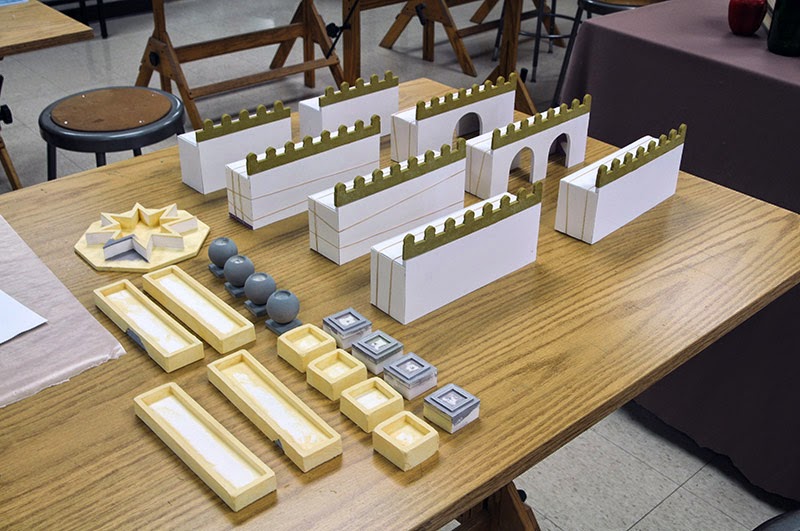 I really enjoy the various clubs and contests on the Lead Adventure Forum- they keep me focused on getting things done.
Posted by Dr Mathias at 1:48 PM No comments:

The stain on the North African buildings isn't fully dry yet (after a few days) so I went to work on the mud brick walls. These should come in handy for fortifications used by Europeans and Arab slavers in my Darkest Africa games, and also fit in the outskirts of the Islamic inspired town project.

The materials used include a Likto brick stencil, a palette knife, some drywall mud/joint compound, carpenter's wood filler and something to screen onto- in this case 1/2" Gatorfoam. It's a much tougher version of foamcore and correspondingly more expensive. I painted the screen on both sides with shellac because I knew I'd be washing the joint compound off. I should have given it two coats, it has warped slightly and a few small pieces delaminated after repeated washings and screenings. 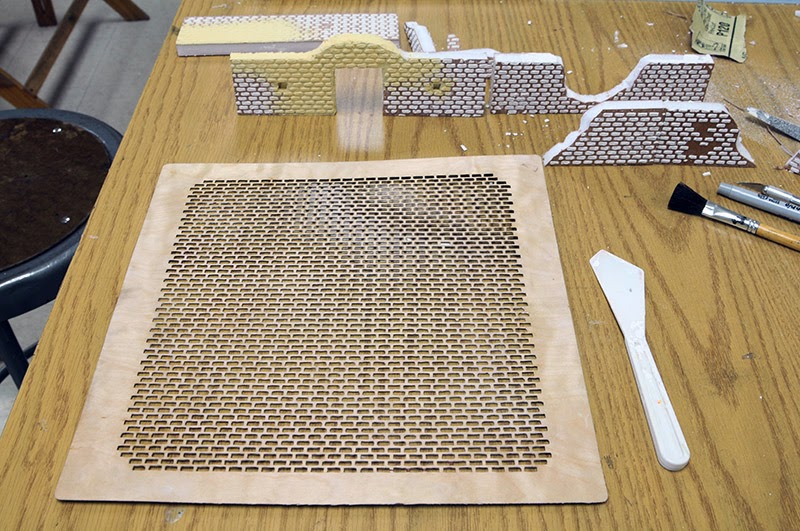 I mixed a little water into some of the filler, enough to make it squeegee through the screen more easily, yet still stiff enough to hold it's shape . 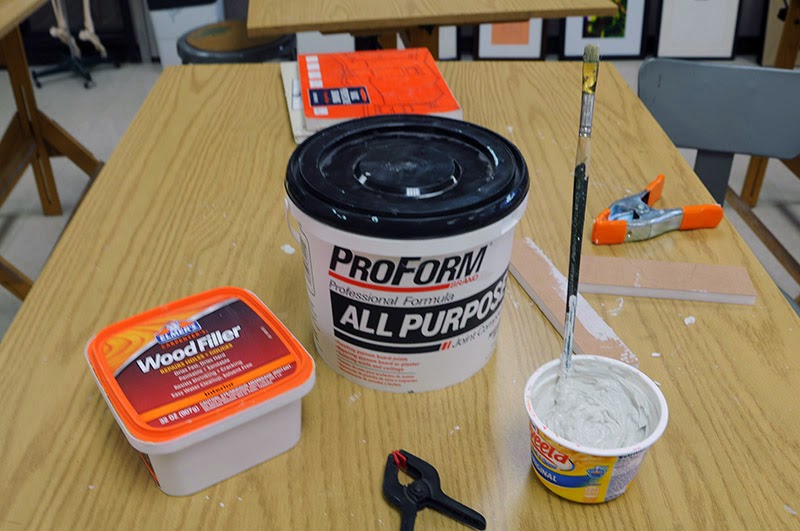 Screened through using the palette knife. 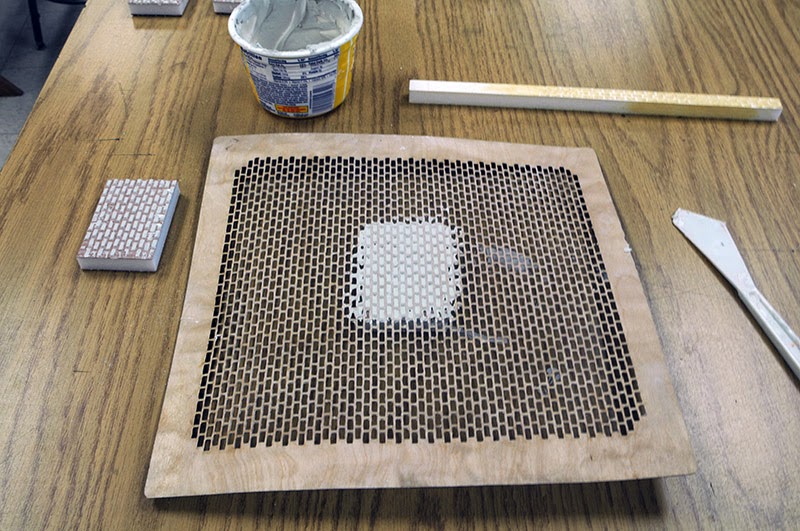 Wall stacked up and ready to have loopholes drilled. 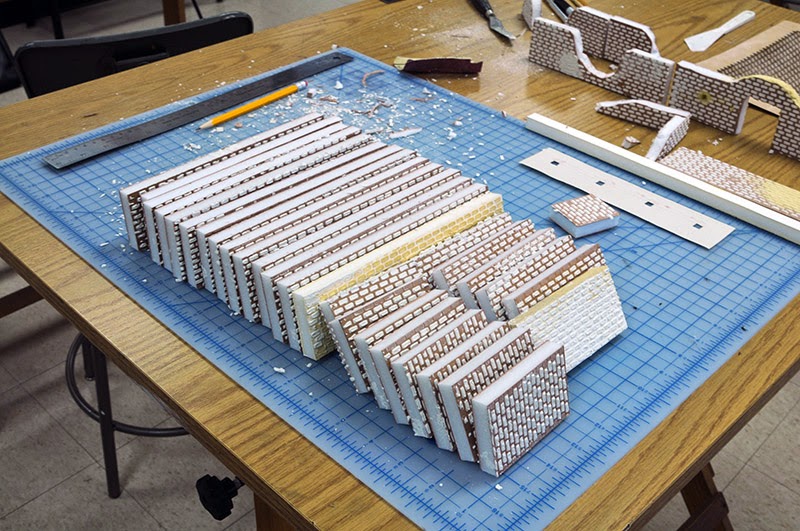 They'll receive a coat of thinned wood filler to soften the edges and make the bricks merge into the wall visually. 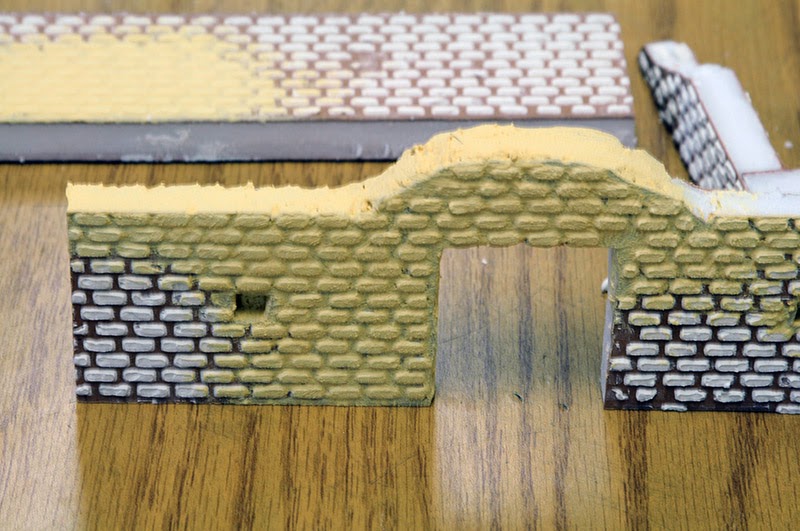 I also started some 'planters' to hold palm trees and cycads. Most of the middle eastern style villages and cities I see on the tables have palms randomly scattered around. I wanted a few to look more integrated into the other architecture. The smaller square ones have a nut or washer glued underneath to give it some weight. The star shaped walls I'm working on are destined to be a fountain. 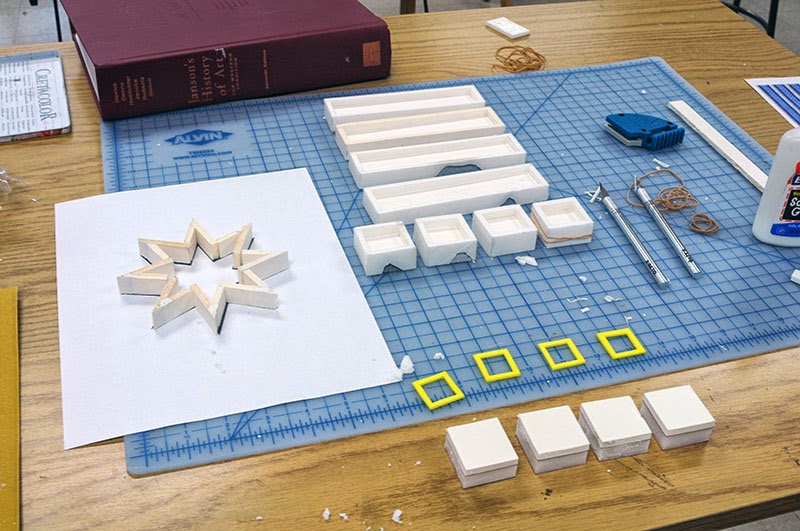 More to come, thanks for looking.

I managed to do some significant work on the Modellbau Najewitz buildings today. I tried doing some staining over a primer layer, which didn't give the look I wanted so I ended up painting them with a flat indoor latex, then picking out the screens, posts, and doors with brown. This was followed with a stain of MinWax Golden Oak. It doesn't quite match the Harem building but then again total uniformity in the coloration isn't a great idea anyway. 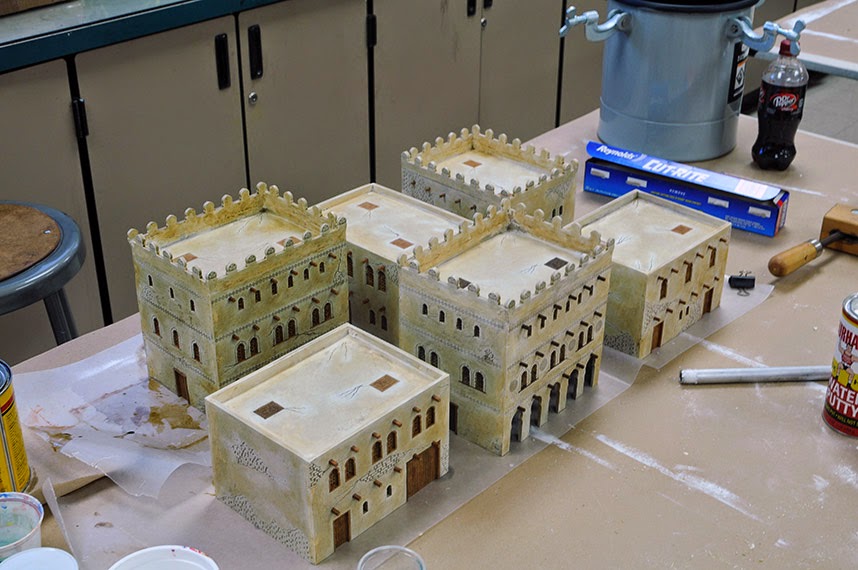 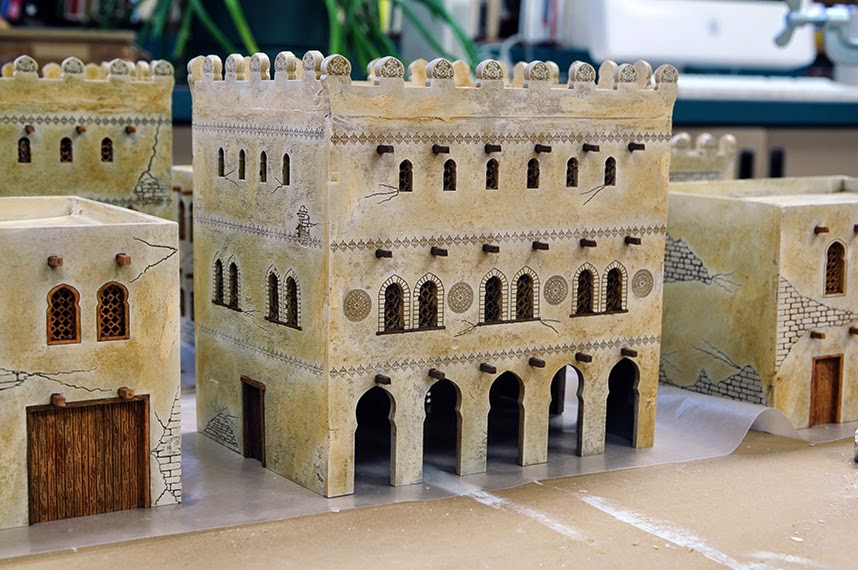 I'm also doing some experiments on a good way to make mud brick walls for my Darkest Africa project. Here is a pic of some Gatorfoam that has a layer of bricks screened onto it, using a Litko brick template. I'll be posting more images of this little endeavor later once I get it figured out. 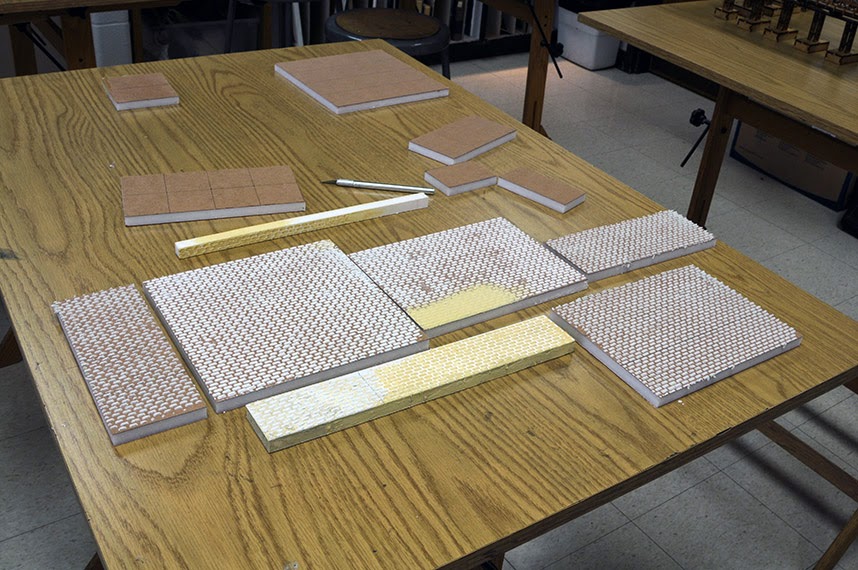 Thanks for looking!
Posted by Dr Mathias at 2:37 PM 3 comments:

About three weeks ago Wargames Factory sent me two boxes of their most recent kit, the Woodland Indians, which is the fourth set their War of American Independence range. I finished them up on Sunday and took some photographs before mailing them off to WGF. 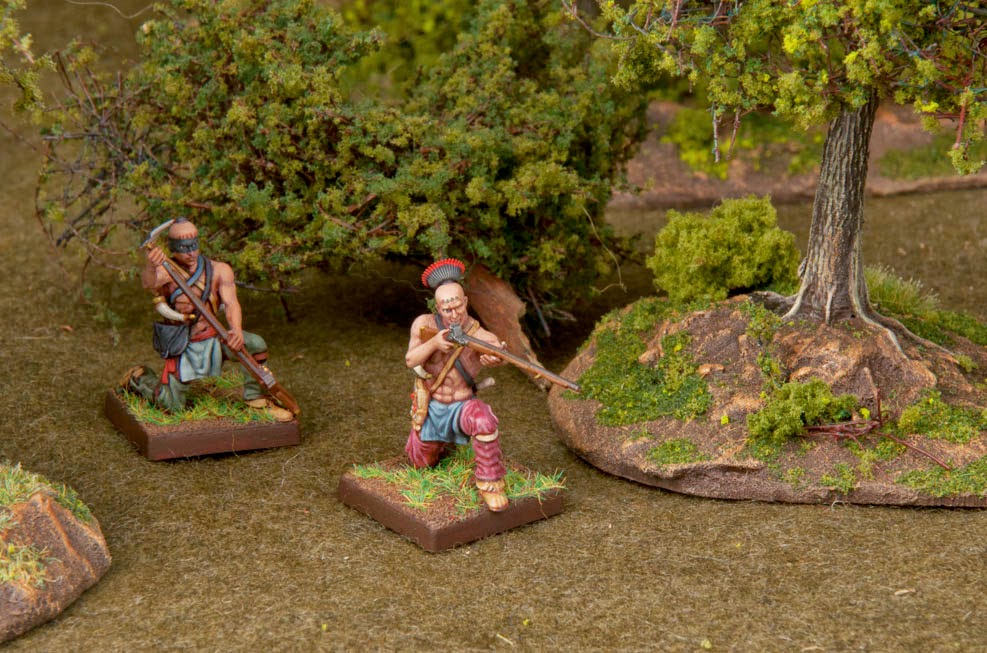 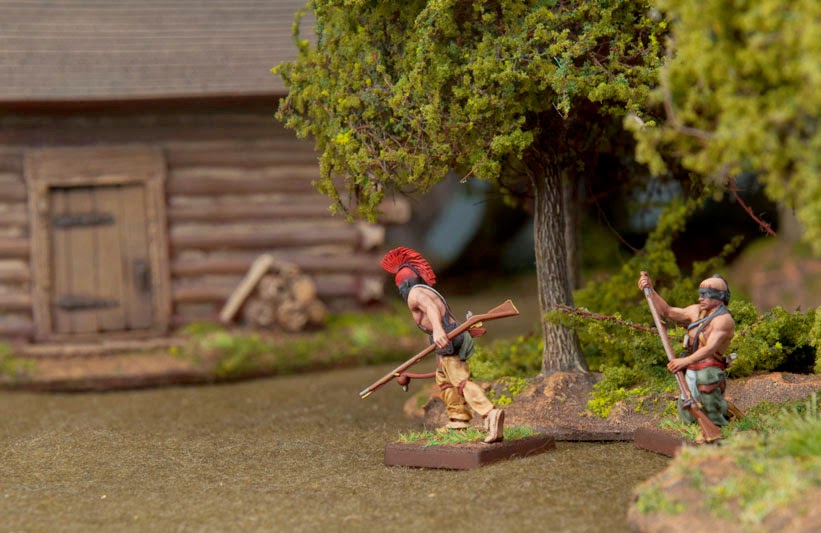 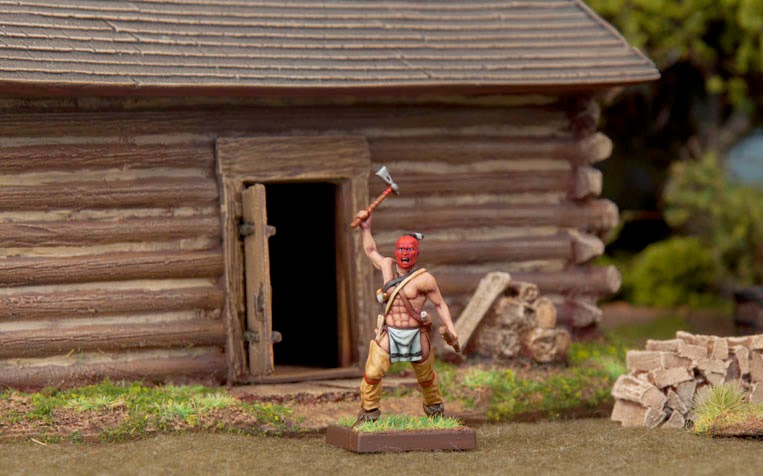 It's an interesting kit with well defined details, which makes them easier to paint. I was surprised that there weren't a few more firing poses, European style shirts for a few figures, and a pose drawing a bow. These are minor complaints though and I think we will see some really neat conversions and interpretations of this set. I'm planning to merge a figure or three with the Miltia, and maybe a couple post-apocalyptic savages using the Survivors sets.

The cabin is a resin building from Architects of War.

I was a backer of the long-delayed Relic Knights Kickstarter, and I picked the Cerci Speed Circuit faction to focus on. One of the Cerci units is a group of jetbike riding bad girls called the Hell's Belles. Although they come in squads of one to three figures there are only two sculpts.

To add a little variety I swapped in an extra head provided by the Valkeeri jet sled pack. I think it fits pretty well and the color scheme solidifies her Valkeeri heritage. 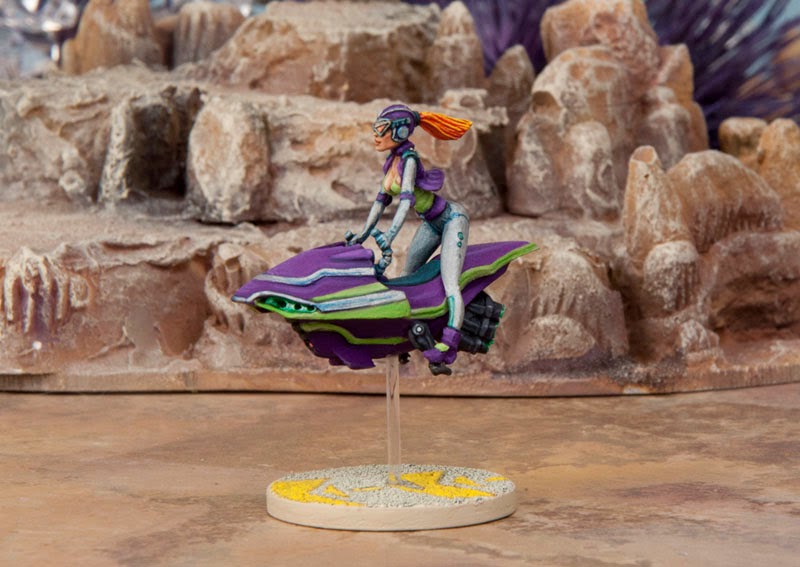 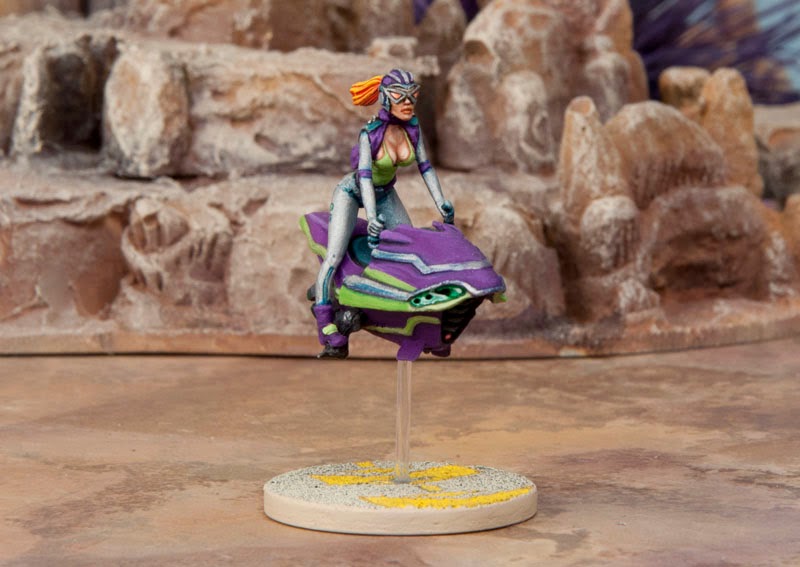 I finished a small side project today- a set of 28mm Renedra plastic 'Bell Tents'. These were included in the 'Horns of the Buffalo' box set from Empress Miniatures (or Warlord), which I am slowly chipping away on. 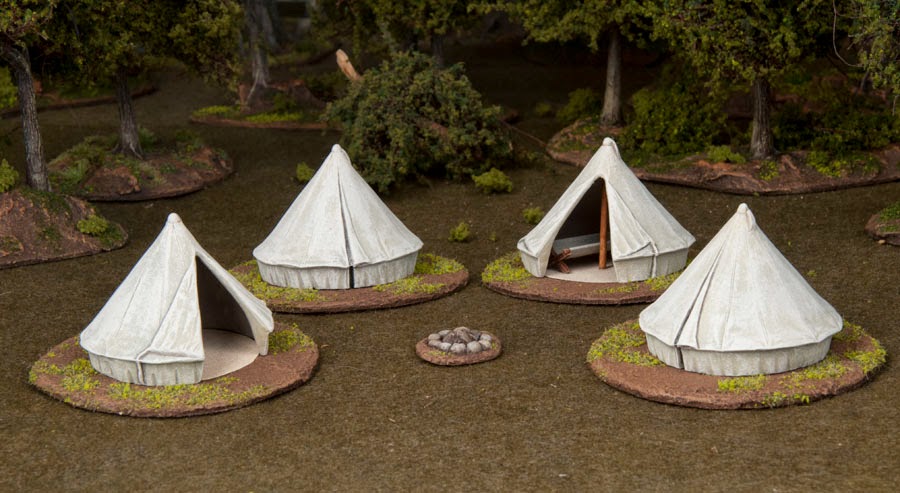 The tents are smallish but overall I'm happy with them. The set includes two open tents, two closed tents, two cots, and a fire pit. I like little details that help a scene look lived in.

There were some mold lines that needed scraping, and the open tents have some protruding plastic on the inside that needed removal. I added a central pole by cutting a thin dowel to length (I could have used a toothpick but I was out). A small circle cut from canvas textured paper provided a tent floor. 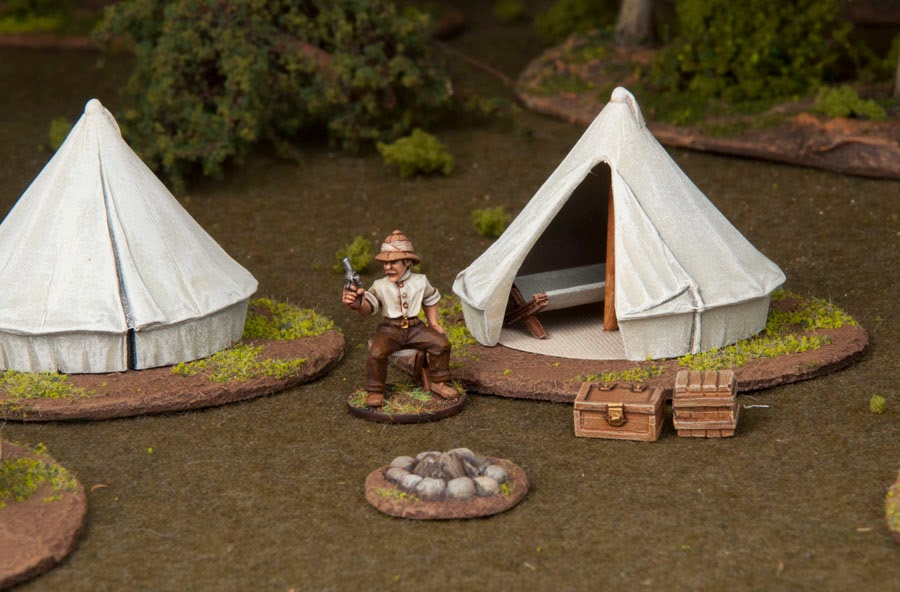 Here is a picture with a seated 28mm Copplestone explorer, from Foundry's Darkest Africa range for scale.

Thanks for looking!
Posted by Dr Mathias at 5:40 PM No comments:

My favorite forum, Lead Adventure Forum, started a thread necromancy club in which a person revives an old thread and abandoned project and vows to complete it. 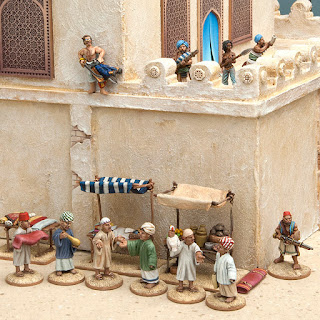 I selected a project that I intended to be quite big at one point, but for whatever reason saw little to no forward movement. I'd built a 'Hollywood' harem building for the 2013 Lead Painter's League and I always intended to make more buildings for a generic Middle Eastern or North African setting. I acquired six of the Modellbau Najewitz buildings and let the boxes gather dust for two years…

Last week I set out the components of the six Modellbau Najewitz North African buildings (and some trees I purchased several months ago) and shook my head at the sheer number of palms I planned to use. 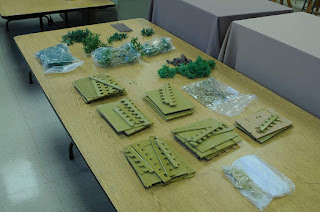 I then started on the buildings, which are quite the pain in the ass. 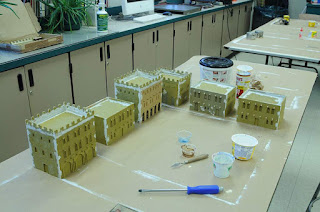 It took about eight to ten solid hours of work over the last week just to get them to this stage. Even though I wore a dust mask I'm sure I knocked a decade off my life, there was so much dust generated by the belt sander I used to flatten the backs of the pieces. This was necessary so that I could clear out the window screens and get an even fit on the walls. The depth of the components varied a lot- they're cast from open face molds. This is a big problem on the crenelations, which are separate pieces. Some pieces were missing corners because the pour was too thin and the mold was not level.

The wood support bars are cast in one piece with a perpendicular bar to support the roof… these do not fit right and required clipping and breaking apart to get them spaced right- not to mention having to bore out square holes to get many of the beams in. I discovered I was shorted beams for two of the buildings, so I had to acquire a piece of basswood to use for the missing pieces. I wish I'd started with that method because it went much quicker. If you intend to get these buildings, bin the included beams and make your own.

I think they will look good once the filler is sanded and they're painted. They have some very nice detailing which will set them apart from more generic looking middle eastern structures on the market.

I hope to have them painted soon- thanks for looking.
Posted by Dr Mathias at 3:03 PM 2 comments:

My first completed figures for 2015 are ready for presentation. 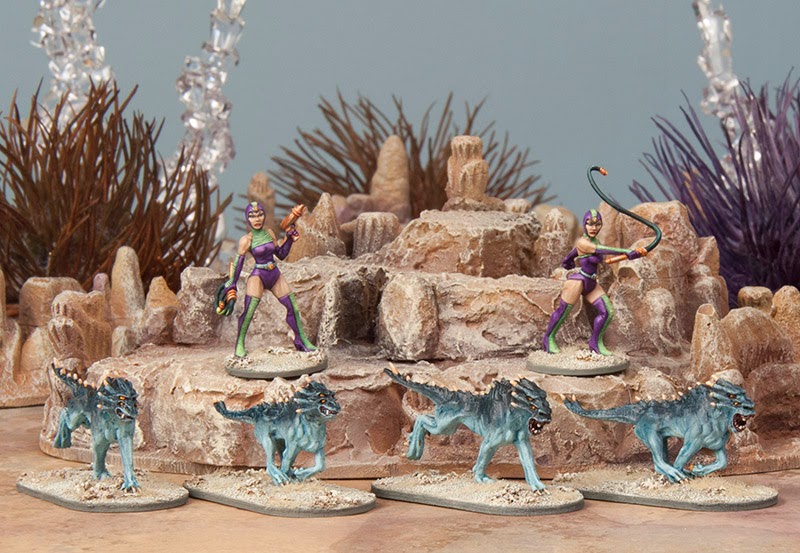 Matt Beauchamp of Hydra Miniatures sent me some Valkeeri Controllers and Stygian Panthers as soon as they were released. They are part of the 28mm  'Retro Raygun' range and the Valkeeri are some of my all-time favorite sculpts from any manufacturer. The Valkeeri are quite lovely as far as space dominatrices go, and they are also amazingly crisp sculpts and a pleasure to paint. John Winters has really done a fantastic job sculpting them. 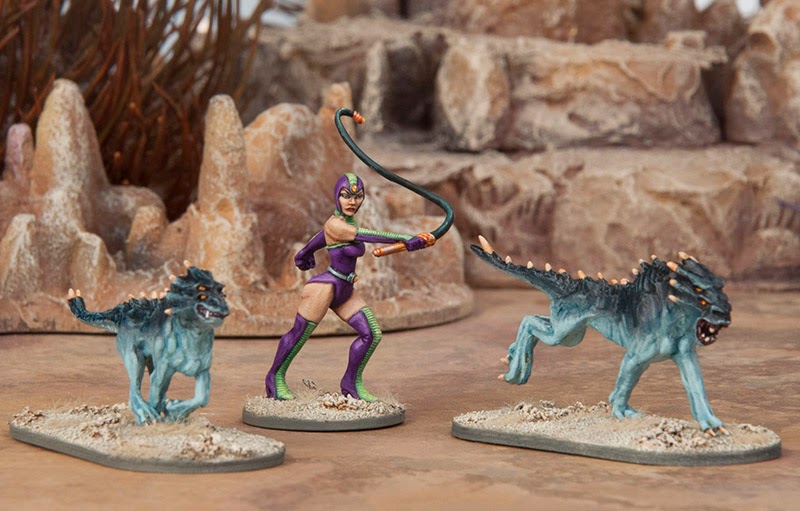 The panthers were sculpted by eBob and are nicely threatening non-terrestrial beasts, their most otherworldly features consisting of four eyes and a plethora of spiny protrusions. I plan to use these critters as beasts in Dark Eldar arena, as well as for the Retro Raygun rules when they arrive on the market. 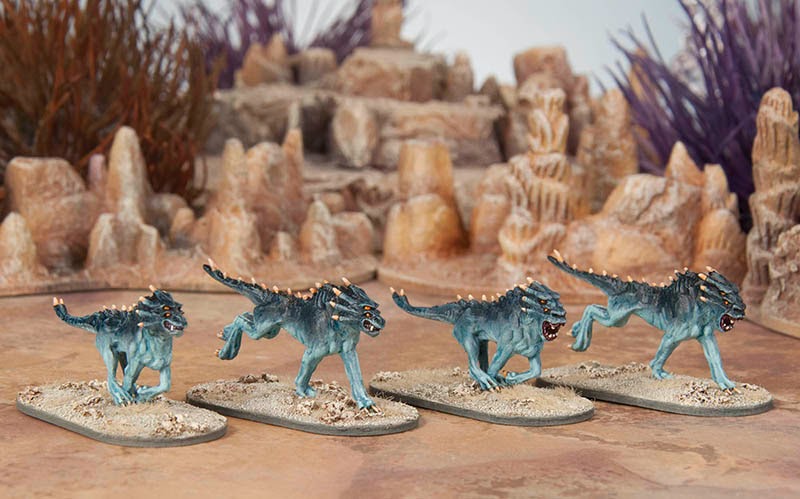 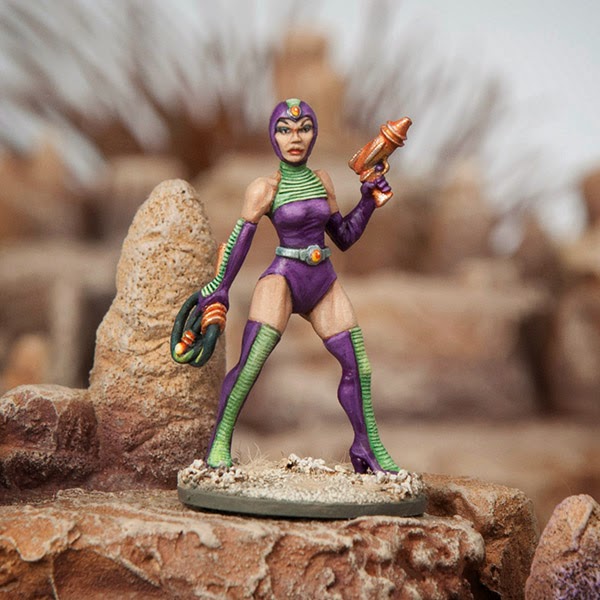 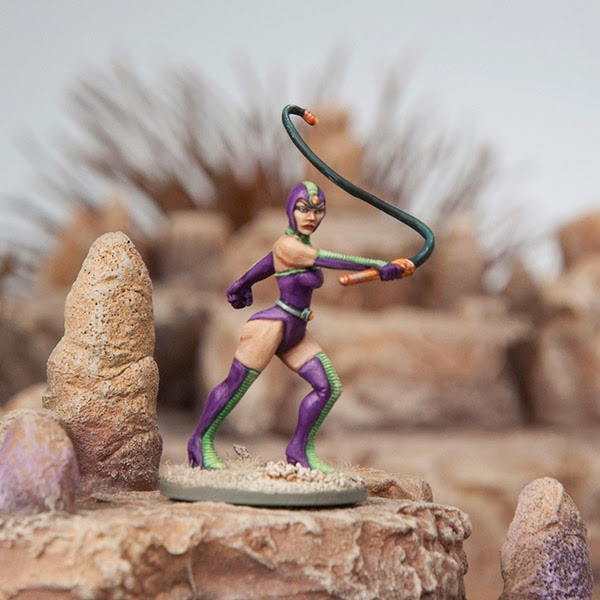 Pictures of the Valkeeri I painted in 2013 and 2014 for the Lead Adventure Forum 'Lead Painter's League': 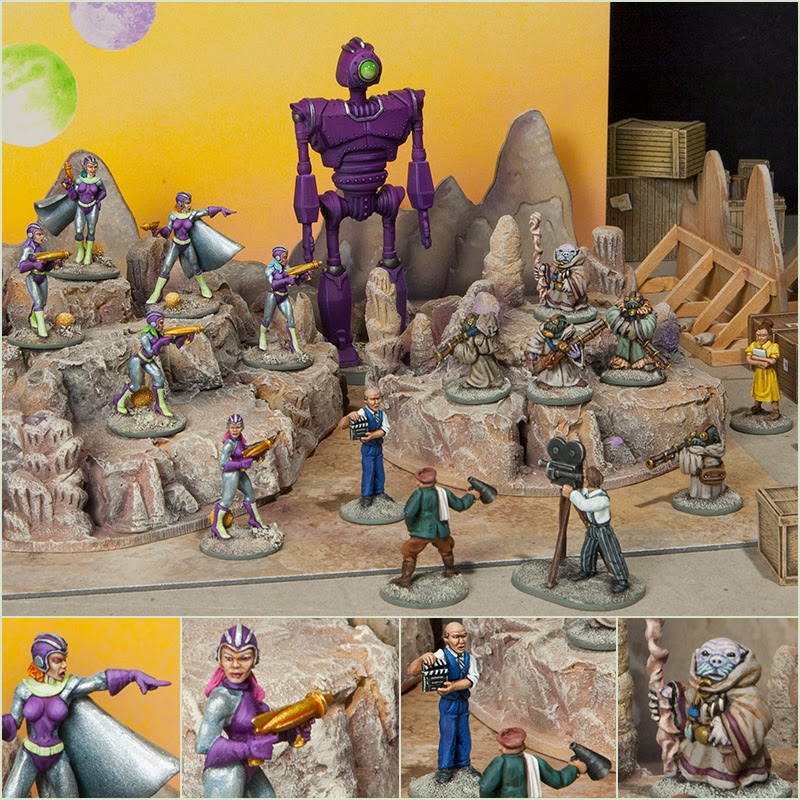 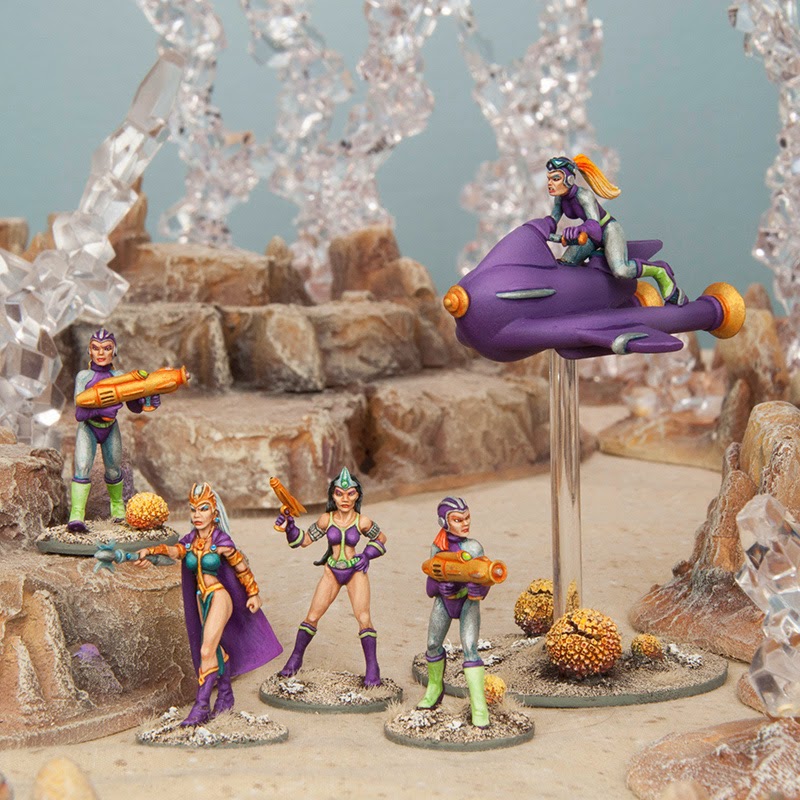 Here's a link to the Hydra webstore:

I've started a miniatures based website at least twice over the years- in one case it consisted of several pages and quite a few image galleries. My hope was to fill a void left by 'The Major General Tremorden Rederring's Colonial-era Wargames Page', which was a glorious website and responsible for causing me to spend a lot of time and money on historical wargame miniatures. I never went live.

I've decided to start a blog because I get quite a few questions from people wanting to know if I have one... and until now, I didn't.

My first image will be the one I planned to use four years ago as an intro to my website- my alter ego and a crowd of onlookers.