Here's another group of reinforcements for my Sisters of Battle: a heavy bolter Retributor squad, a Sister with a flamer, and everyone's favorite blow-up doll, the Sister Dialogus. 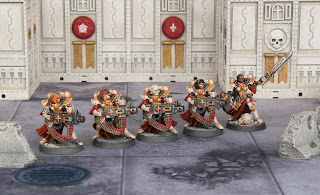 Like the last squad, the Superior is a conversion using a head supplied by Statuesque Miniatures, with a sword by Trolls Under the Bridge. This time I used a 'Pulp Scale' head- I tried a 'Heroic Narrow' and after painting it decided it was too big. One sister received a new purity seal and a slightly fuller head of hair. 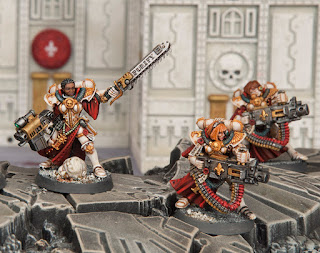 The Dialogus... what more can I say? I have another one that is going to get a new head :)
I'll probably go back and redo the Imperial Eagle on the scroll. My enthusiasm was not high! 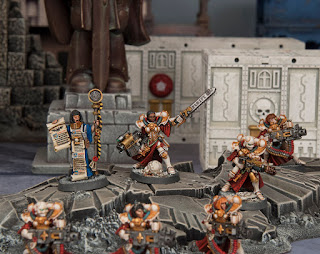 In the background you might notice some terrain items... these are 'Makitainers' from a Maki Games Kickstarter I picked up a couple of years ago.

I'm slowly chipping away on my Sisters of Battle, hoping that I can get the majority of what I have done before the new models drop at the end of the year. I have been collecting this batch since the Witch Hunters codex, and I'd like to get at least one unit of each codex option, and at the very least one of each model. 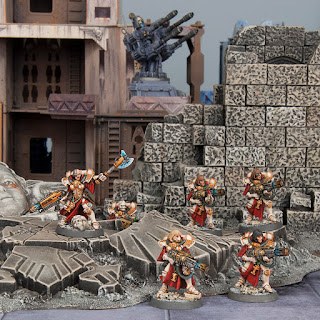 The Sister Superior is a conversion, using a plastic combi-melta from one of the Space Marine kits, a head from Statuesque (Bionic Heroic Narrow I think) and a power axe from Trolls Under the Bridge. Considering that these women get up close and personal I figured some serious battle wounds would show on the veteran. She looks a little unhinged :) 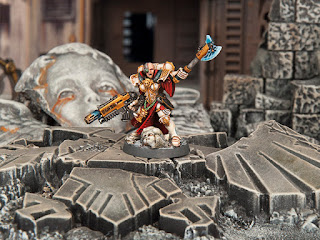 Up for perusal is a mutant toad I made several months ago (probably over a year, honestly) and recently finished basing. 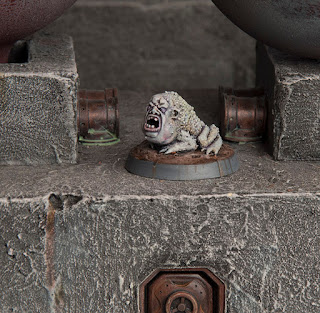 The body is a Citadel Giant Toad and the face is one of the more recent plastic Games Workshop Ogre heads.
Posted by Dr Mathias at 1:39 PM 2 comments:

I picked this miniature up loose at GenCon a couple of years ago and painted it up recently. I was a big Khorne fan back in the Rogue Trader era (and like many people sold my army to later regret). 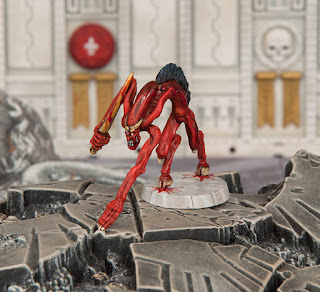 I think this version is the most horrifying- the later steroid bulked versions seem too brutal and don't have an 'otherworldly' vibe. I also tried out some of the Games Workshop technical blood effect paint, it seems to do the trick very nicely.
Posted by Dr Mathias at 7:01 AM 6 comments:

Fans of the venerable and wacky 1st edition of 40K, Warhammer 40,000: Rogue Trader, may remember this fellow, from the relatively hard-to-get Chapter Approved: Book of the Astronomican. Despite his old-school sculpting style he's fairly new and available from Knightmare Miniatures. 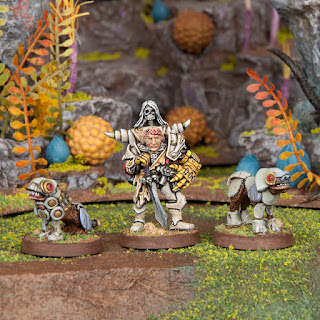 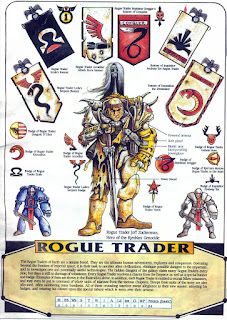 Needless to say I went for a close match on color scheme, but it looks like I could have went a bit more yellow on the lower armor.

The two 'pets' are from Blind Beggar Miniatures.
Posted by Dr Mathias at 6:39 PM 4 comments:

Here's some recently painted Necromunda Goliaths, the 'Ourangs'. I've had the new Necro box set for a year now and just now got to it. Goliaths are my least favorite gang so I painted them first... also my friend started and finished his Escher before me :)

I decided to give them some giant ratskins using greenstuff. I still haven't decided on the backstory for that. Maybe the gang founder was aided by Ratskins for some reason and adopted their traditional costume as a sign of respect. 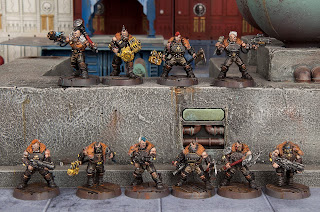 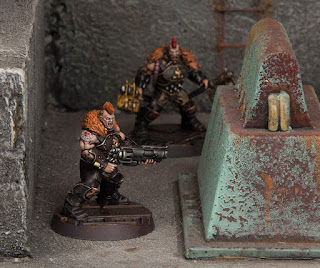 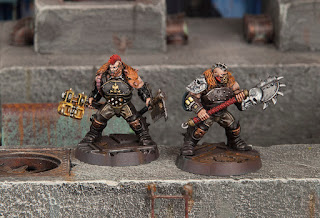 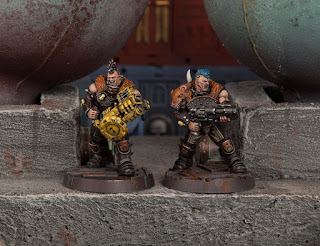 I ended up liking these guys quite a bit after I got done. My intention was to speed paint them pretty quick and go 'Blanchitsu' on them, so I used a lot of washes instead of direct painting. Still ended up pretty 'clean' though... I have trouble going gritty apparently.

I'm working on a 3D Zone Mortalis as well... not sure its worth the time!

I picked up the recently released Blackstone Fortress and in record time (for me anyway) and built everything within a couple days. The miniatures are going to take a while, they are detailed things. 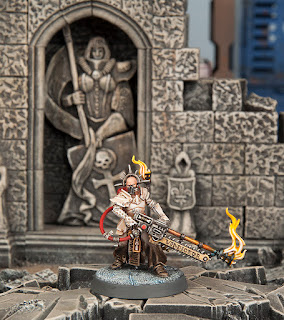 I started with Pious Vorne since I was painting some Sisters of Battle anyway, and decided to go with light bone-colored armor and clothing, which I soot stained with lots of black washes since she's a pyromaniac and spends a lot of time walking through heretic ashes. 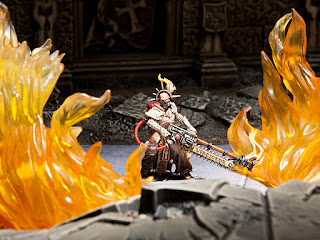 Avid followers of Games Workshop's releases likely know that they announced a new Ambull miniature on Saturday. Ironically that was less than 24 hours after I put the final spray varnish on this Rogue Trader era Ambull. I'm always a day late and dollar short :)

Truth told I'd have felt worse if I still had him laying around unpainted upon a new release, like my Rogue Trader Genestealer hybrids! 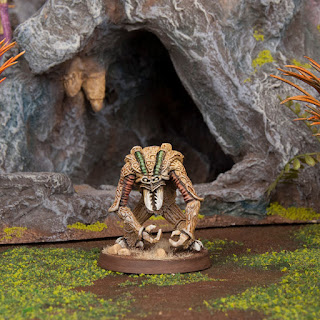 Second shot includes the Knightmare Games version that I painted a few months ago. 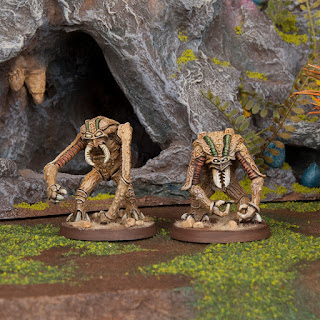 Here's some info on the old school Ambull:

Up for perusal is a figure I painted a week ago and forgot to post. The Games Workshop/ Citadel 'Space Santa' from 1986. I had hoped to get him and some helper elves done for a Christmas Rogue Trader game, but alas it was not to be... 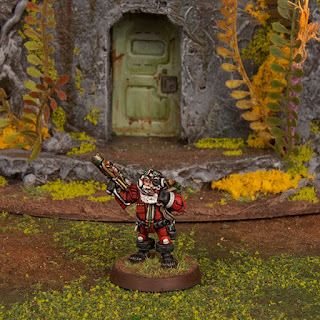