I added two new recruits to my small Frateris Militia band. The woman is from the Void/Urban Mammoth range, the man is a militia miniature from the old 2nd edition 40K days, with some weapon swaps from Mad Robot. 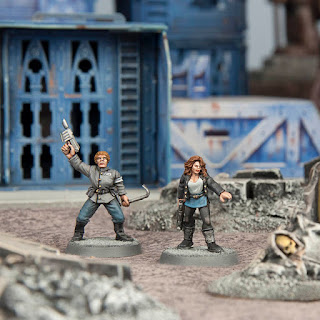 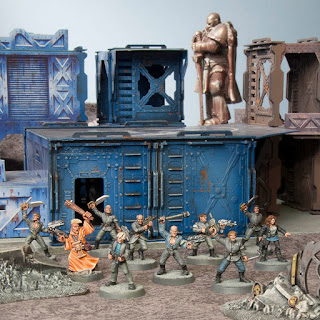 I added a member to my Tau Kill Team for Shadow War: Armageddon. The original model is a 'Worm Man' from Hydra Miniatures' Retro Raygun range. After removing his original gun, I added a Tau carbine, a greenstuff helmet, and some new greenstuff arms. 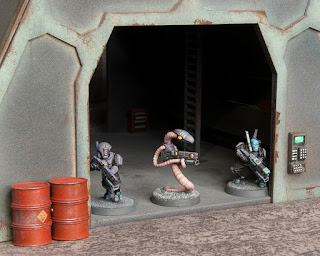 About a week and a half ago, I played the penultimate game of the Shadow War: Armageddon campaign my friend and I had been running. After winning it, I had acquired sixteen 'Promethium Caches' and therefore needed one more win to end the campaign victoriously.

I decided to switch out my flamer for a second storm bolter. I wanted to do a conversion, since the flamer gunner, Sister Ignatia, had a badass mask and the storm bolter model doesn't. I sculpted the mask out of greenstuff- I was pretty happy with it because it's one of the more detailed things I've sculpted and seems to match the original pretty well. 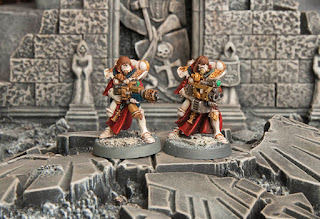 I also wanted to paint a Sister Repentia, a special character option. I had an extra promethium cache anyway, so I wanted to use her in the (assumed) final game. Her stats are pretty terrible compared to the Celestian, but I wanted to add her anyway. I decided to paint an unofficial model from Wargames Exclusive. She's on the cheesecake/pinup side, which I guess was good since she spent the majority of the game face down, ass up, after getting shot in the back by an ork with a big shoota. 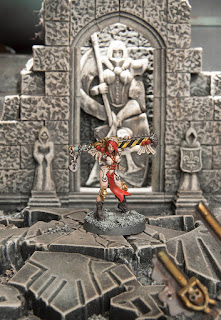 One other little addition was a small shrine marker with no specific purpose, made from a broken Hirst Arts gothic bit and an extra piece from the Immolator frame. 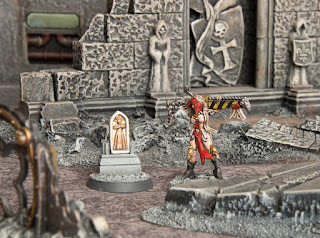 My good luck held out for the final game which my friend and I squeezed in today. My opponent had elected to play the 'Rescue' mission, as I had captured one of his ork warriors in the previous game, and I'd hit the required fifteen Promethium caches and needed to win one more game. 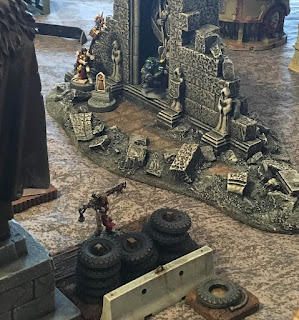 The game might have gone either way really, but he had a very unfortunate roll on the 'promethium sprawl' table. There was a corrosive slick on the battlefield that made running and charging into combat very dangerous. As it turned out, he took the risk of running several times (what ork wouldn't) and his boss and another warrior went down after slipping on the slick.

The Repentia sentry spotted a raider and was immediately sprayed with bullets from behind. I failed my first attempt to bring on reinforcements, so there were some scary moments. The Sister Superior took a bunch of hits from the big shoota, knocking her flat. Praise the Emperor, her armor kept her safe, and after that the battle started heading south for my opponent as I brought reinforcements into the fray and started gunning down greenskins left and right. 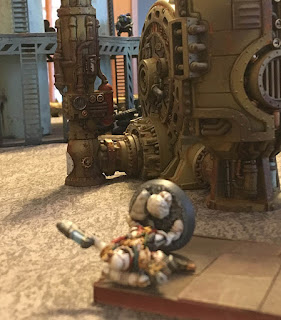 This is my final Kill Team composition, including the optional special characters and extra little things like the shrine and cherub. I like this Kill Team quite a lot and got pretty attached to their narrative. They performed extremely well, although I have to admit there was a lot of luck considering I never rolled a death on the recovery table. 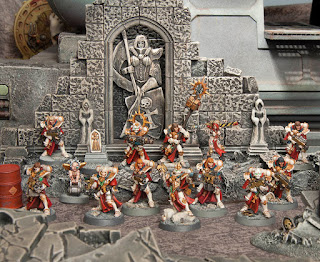