Some pictures of the raiders I painted for the Frozen Expanse project. 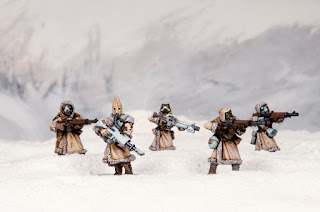 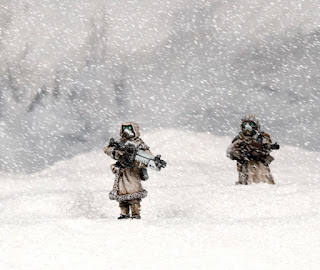 The bodies are Victoria Miniatures (male and female winter troopers), with various bits and greenstuff additions. Heads come from a Meridian Miniatures Kickstarter from a few years ago, some from MaxMini, plus one from the Northstar Frostgrave cultists. 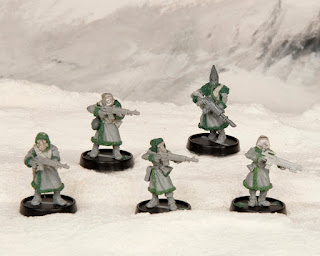 Anyone sifting through my blog will see that I flit around to various genres, with an emphasis on 40K and sci-fi. Several months ago I chanced upon a description of a relatively new game (at the time anyway) called Rangers of Shadow Deep. It is a medieval fantasy setting, geared for cooperative play, and uses the Frostgrave system more or less. I'm not quite sure what it was in the person's synopsis that made me want to play it (I haven't played a tabletop fantasy game since the original Mordheim!) but I decided to dive in because it sounded like a lot of fun.

I bought a bunch of rangers so that anyone I played with had a good set of choices and I settled on a cool female ranger made by Otherworld Miniatures for myself. I picked the name Lewinna, who is a quite obscure saint with dubious provenance I read about in a book on relic thefts. 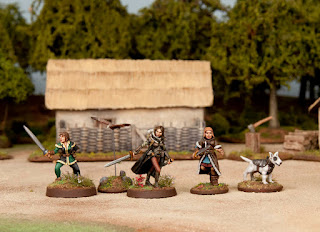 My kids (ages 9 and 5) picked some rangers out of the pile for me to paint for them. 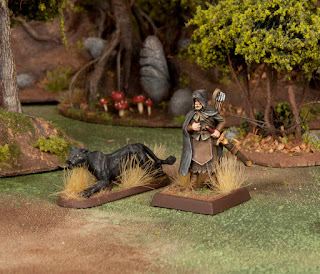 Here we have Blaze and Seeker the Panther, the 5-year-old's pick. He wanted an animal companion since his older brother had one, and wanted a panther. Luckily I had a Ral Partha lioness unpainted in the lead pile. The ranger is from Reaper. 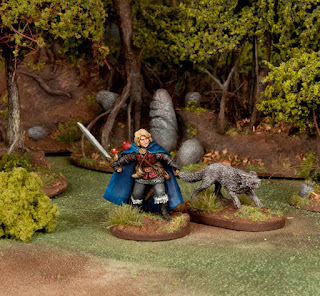 Thor and Mary the Wolf, my 9-year-old's pick. Both are from the same Reaper pack. Not quite sure where the name of the wolf came from... 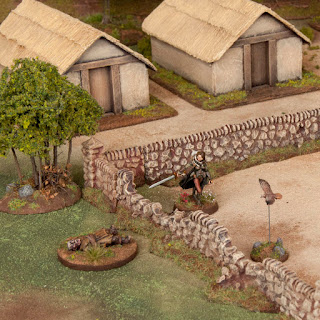 A little scene of Lewinna discovering a clue.

I've played the first scenario twice now, once with the family using four rangers and a companion each, and once with a friend. So far I like it quite a bit and am furiously painting stuff for the next scenario.

I had the opportunity to paint some 3D printed prototypes of two of the upcoming plastic Halflings set being produced by Wargames Atlantic. 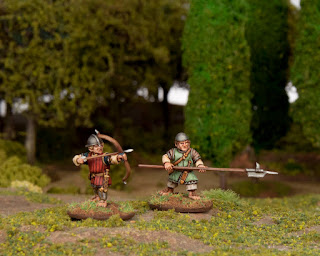 Sprue removal and assembly of delicate 3D parts is challenging, but the print quality was super high and they are a good indicator of the quality of the upcoming set. I think people will like them.