I finished up my last member of the 10 Sister Kill Team for Shadow War Armageddon. I had used another sister model for the character for one game- she charged an ork and managed to take him out (with a lot of luck), so I decided to roll for a 'combat' advance.
Sister Anna ended up with 'Feint', which is pretty lame for a battle sister- essentially the model gives up an attack dice for a +2 to the combat resolution. The big problem is that regular sisters can only get bolt pistols or combat blades for melee weapons and they don't have a lot of attack dice to be giving up!
It was at this point that I re-read the rules and discovered that we'd been doing advances wrong the whole campaign. Roll twice and choose which one you want :)That would have made a HUGE difference in my teams skill set!!!

I decided to stick with the skill though, as disadvantageous as it is, mainly because I wanted to do the bolt pistol/combat blade conversion I had in mind and my Sisters are acting a bit crazy anyway. 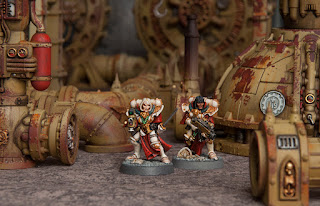 It was a pretty challenging because I started with the 'pulling grenade pin with teeth' pose. I also painted up another Sister, with dark skin for variety... she's probably from Tallarn. 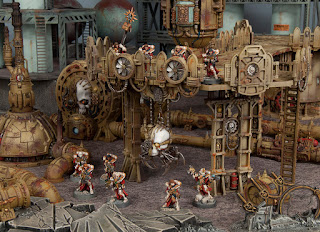 Within the last couple of weeks I managed to complete the Shadow War box set terrain, a set of Haemotrope Reactors, and a Promethium Relay. Very time consuming. 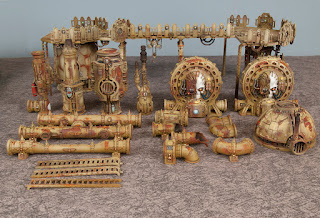 This set will probably be showing up quite a bit in future pictures.
Posted by Dr Mathias at 8:09 PM