One of the Facebook groups I am in runs an occasional challenge for painting a specific sculptor's miniature. For June, the 'Oldhammer' group had a 'Justice for Gary' challenge. It seems Gary Morley (a sculptor for GW back in the day) had recieved some flak for listing some rare things for sale, and some responders didn't equate the name with the sculptor and called him out on some stuff. Add into that mix the opinions on the old Nagash sculpt... hence the 'Justice for Gary'.

Anyway, I picked Karloth Valois for my entry, as I had the mini in my stash and just did some other 40k vampires so I might as well carry the theme. I think I may have painted this guy in the 90s- if I did, I sold him off many years ago. 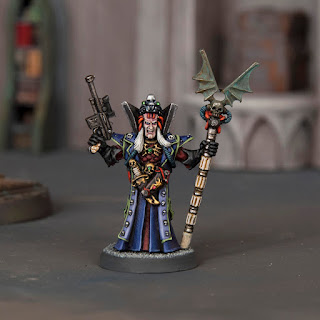 This was a fun miniature to paint. I chose a tertiary triad scheme to up the weirdness (blue-violet, red-orange, yellow green). Might have to figure out a way to have him up against the other space vamps :)