Blood on the Sands - Gladiators

Several years ago I did some illustration work for a gladiator game that was in development. Despite being a great game, Blood on the Sands sat in limbo until a couple of months ago when the developer unveiled a revised draft. The new rules heavily lean toward a short campaign, requiring six gladiator types. I only had four painted, so I cracked open the storage and pulled out enough for two of each type, for my friend and I. I primed them up and they have sat a couple weeks, with only a base skin tone layer.

Today I painted my ass off almost all day and knocked out the group. I'll have some detail pics up later, hopefully with some battle reports. 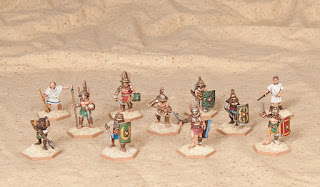 Email ThisBlogThis!Share to TwitterShare to FacebookShare to Pinterest
Labels: 28mm, blood on the sands, Crusader, Gladiators